A NEW ERA WITH

Following its premiere on triple j Drive yesterday, Thornhill return with their edgy and riff-laden single ‘Casanova’ today. Marking the band’s first taste of new music since their acclaimed 2019 debut album The Dark Pool, the release finds the group stepping into an inspired new era complete with an elevated sound and image. Its new music video confirms this and will no doubt have media, industry and faithful Thornhill fans wondering – where are the band going next?

“’Casanova’ is about the extensively taxing experience of falling deeply for someone that you’re too afraid to completely grab onto. The kind of situation where you’re almost scared to love them and begin fixating on the little things you dislike about them or create stories in your head about them in order to keep your distance, so you don’t get hurt or hurt them,” he says.

“To match the mood of this track instrumentally, I decided to create a sort of 007 scenario, to match the vocal direction I was taking in order to get the point across without making this a sad track. I use the eyes of two agents that are stuck in a dance of death with orders to kill the other while assigned to the same case, they must choose whether or not to follow through with orders they don’t agree with.”

‘Casanova’ was mixed by George Lever (Sleep Token, Loathe), meanwhile its music video was written by Jacob Charlton and edited by Third Eye Visuals amidst lockdown hurdles in Melbourne.

Thornhill are set to play Full Tilt and UNIFY festivals over the coming months, as well as support the likes of In Hearts Wake on their Australian tour and Bury Tomorrow& August Burns Red on their co-headline Euro/UK run in 2022.

About Thornhill:
From their hometown in Melbourne, Thornhill broke out of the local scene with a pair of EPs in 13 (2016) and Butterfly (2018) – spawning support slots alongside scene heroes including Northlane, Architects, Parkway Drive, In Hearts Wake, Beartooth, Make Them Suffer and The Plot In You, before their full-length assault: The Dark Pool arrived a year later.

Presenting commanding singles including ‘Nurture’ and ‘Coven’, dynamic soundscapes like ‘Where We Go When We Die’ and gripping themes on humanity, anxiety and loss, The Dark Pool was a winning full-length debut effort. Awarded a laundry list of accolades including triple j’s Feature Album and additions countless Best Of The Year lists, the release also saw Thornhill awarded nominations including Best International Breakthrough Artist at the 2020 Heavy Music Awards, and Best Independent Heavy Album/EP at the 2020 AIR Awards.

Two years on from The Dark Pool and the album has garnered close to 27 Million streams and over 3 Million Youtube views on its music videos. Meanwhile, Thornhill have become one of UNFD’s most in-demand artists for physical releases, peaking at #1 and #3 on the Physical Vinyl and Physical Australian Charts respectively, and selling over 8,000 physical equivalents in the US alone.

Possessing a sonic character and resolve few young bands can claim to grasp, Thornhill are travelling at breakneck speed towards global domination, and ‘Casanova’ marks just the beginning of their quest. 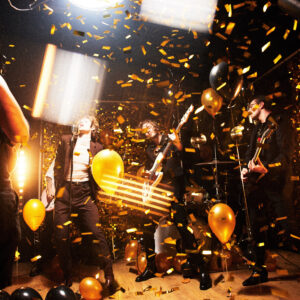