Following on from the successful release of ‘Red Light’ in April, South Coast legends The VANNS present an uplifting new cut in ‘Feels Good Now’.

Powered by beautiful guitars and production, buoyed by Jimmy Vann’s rich vocals and executed perfectly by the rock four-piece, ‘Feels Good Now’ is an enriching listen.

Focused on the struggle to and eventual acceptance, of changing your life for the better. ‘Feels Good Now’ is wrapped up in an uplifting arrangement and is basically what the title suggests.

Like ‘Red Light’ before it, ‘Feels Good Now’ came out of sessions. The VANNS did with producer Chris Collins (Gang of Youths, Ruby Fields) at The Music Farm.

“The song was originally meant to finish with a fade out, but we were having too much fun playing it for it to end so soon. We wrote (and I use that term loosely) the jam at the end of the song at the last minute, before we got in the studio and tracked it.

Thematically, ‘Feels Good Now’ is about taking a risk on something that you feel needs to change in your life despite any anxieties, apprehensions and reasons why you tell yourself you shouldn’t.  Actually pulling it off and feeling all the better for it. It’s a good feeling, hence the title; we can’t bloody wait to play this one live!”
The VANNS, Cameron Little

Working with their tour manager and best mate Jules Bourne, as well as DP Surfboards and videographer Sam Tolhurst, The VANNS made sure that the ‘Feels Good Now’ music video came through strong with visuals that would make any of us watching yearn for warmer days and the ability to be out in the surf.

Taking footage supplied by DP Surfboards and Tolhurst, Jules edited the video; a way for The VANNS to throw their support behind Australian talent and more importantly, their local community.

“As we have been in lockdown for a bunch of weeks now and unable to get together as a band it was proving impossible to get a film clip together for ‘Feels Good Now’. I wanted to collab with a local business and show support in any way we could in these uncertain times and my local surf shop, DP Surfboards, were more than keen to help us out with some epic footage for the clip. The footage was from all around the world and from some epic local spots.

Support your local! Go check out DP Surfboards and keep an eye out for Sam’s film Pyrophytic, which he is working on with local surfer Brett Connellan.”
THE VANNS, Jimmy Vann

Throughout the last year and a half, The VANNS have proven their resilience and strength as a band. Utilising the momentum the release of their breakthrough debut album Through The Walls spurred, The VANNS formed for themselves a strong reputation as live performers around the country.

Reaping industry acclaim including the lucrative triple j Feature Album and Like A Version series, the band easily converted the praise and stock being invested in them by tastemakers and respected outlets into a beloved show that has gone on to sell well over 6000 tickets across the nation and accrue over 10 million streams to date on all platforms.

And while touring may be on pause for now, The VANNS’ newest release serves as a reminder that when audiences and band can gather together again, there’s a lot of fun to catch up on.

Feels Good Now’ is out now. 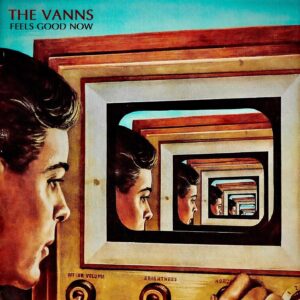