Domestic La La is pleased to announce the signing of fast-rising indie-surf act The Terrys.

Today’s news also comes alongside the announce that Domestic La La will release the group’s acclaimed The TerrySonic Mixtape on vinyl for the first time. The extended edition disc features The TerrySonic Mixtape, as well as the band’s back catalogue on the B-side and is available now on 24 Hundred.

The Terrys’ love of homegrown music sees the band naturally drawing inspiration from artists such as The Bungalows, Pond and Skegss with a hint of British influence from bands like Will And The People and Jamie T. With hooky guitars, fast and furious drums and charismatic vocals, The Terrys are on track to be one of the biggest names in the country before too long.

Home to adored Australian rock acts including Dear Seattle and West Thebarton and fellow rising stars such as LOSER, Teen Jesus and the Jean Teasers and Divers, Domestic La La is the label venture of Violent Soho guitarist James Tidswell.

On discovering and signing the group, James shares:

“I first heard ‘Pesos’ by The Terrys on Tuna Tuesday. I fell in love with the song and left it on my playlist all summer. They were the only band I saw live during 2020 and the show I went to was the first time they played to a crowd where people were standing. Terry himself was at the show and I hung out with the band’s parents and felt very much a part of their family so I welcomed them into ours. The Terrys are such an energetic bunch of artists who genuinely love what they do and I couldn’t be more stoked to welcome them into the Domestic La La family.”

On working with James,  The Terrys add:

“We still remember the day James like our Facebook page and it was such a wig out, he was frothing our song ‘Pesos’. He ended up coming and to our first ever show in Brisbane and it was so crazy to see one of our biggest idols singing the words to our songs. We have all watched James and the Violent Soho guys shred and they’re a huge inspiration. The fact that Tidsy even knows our band name is nuts and we’re so stoked to work with him.” 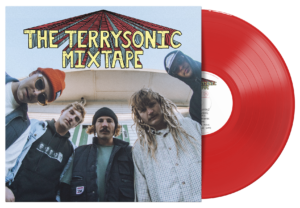 More about The Terrys:Hailing from the sub-4,000 population town of Gerringong NSW, Jacob Finch (vocals), Lukas Anderson (lead guitar) and Ben Salvo (rhythm guitar) began teaching each other to jam in their shared trailer house, owned by landlord/ legend, Terry…. many noise complaints and two additional members in Cameron Cooper (drums) and Trent Cooper (bass) later, Terry agreed to lend the fully formed band his name, and so, The Terrys was born.

​The band released their debut single ‘Video Games’ in June 2020 and quickly began to build a cult following of Terrydactyls. Wasting no time releasing more music, ‘Penny’, ‘Wise Man’ and ‘Aqua Plane ft. Scraps’ followed within months. The Terrys continued to rise in 2020, announcing their first ‘Tezz Fest’ which sold out across Wollongong and Sydney within days before the release of their acclaimed single ‘Pesos’, which landed in the top 20 Australian Songs of the year by the AU Review.

Fast forward to 2021 and The Terrys, barely having celebrated their first birthday as a band, were dubbed “your new favourite surf-indie outfit” by triple j following the release of the heavily supported singles ‘Our Paradise’ and ‘Cost The Peace’. With the wind in their backs, The Terrys quickly sold out their debut East Coast tour, announced another national run and released their acclaimed The TerrySonic Mixtape.

Now freshly signed to Domestic La La, The Terrys are appeasing their fans with its release on vinyl for the first time, and the promise of more delectable tunes on the horizon to boot. 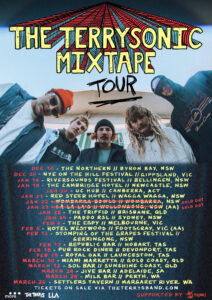