The Perth-based 5 piece, The Southern River Band holds an iconic status with their guitar fuelled madness and howling rock ‘n’ roll that has seen them build an irrefutable reputation for delivering one of the best live acts around.

Their latest release ‘Modern Romance’ is a culmination of everything that makes The Southern River Band great. It’s gritty, steadfast, and filled with palpable power that sees a face-melting guitar solo that feels equally at home on both a national festival stage or your local bar. Since the first iteration of the band in 2015, they have carved out a devout following in that time who seek the unparalleled level of energy that takes over whatever stage they occupy.

If this festival resume wasn’t enough to widen your eyes, their support resume will. They have shared the stage with Cold Chisel, Wolfmother, Rose Tattoo, The Darkness, Birds of Tokyo, Amyl & The Sniffers, Gyroscope and Spacey Jane just to name a few. If these iconic front runners have trusted The Southern River Band to prep and prime crowds, often in the many thousands, it’s evident that they consistently deliver high-energy and unforgettable performances, a testament to their 2021 WAM Rock Band of the Year award.

‘Modern Romance’ is an exploration of the frustrations of 21st Century dating. Lamenting the mind-games and technologically-warped pressures of this confusing spectacle we often partake in. Frontman Cal sings “I’m double checking, second guessing every word that I say, just another of the stupid little games that we play”.

Speaking further about the influences behind the song, he says:“Modern Romance is about exactly that, traversing the already murky waters of love in the digital age. It’s pretty easy to sorta create a facade on the internet, so you never really know what’s going on, or how many people someone has on the go at one time, but if someone just all of a sudden stops talking to you completely, you can bet it’s more than just you (laughs). Then you know, you’re kinda just left there wondering what happened, and you’re sitting there hunover as fuck on a Sunday morning scrolling mindlessly through your favourite addiction (I can quit anytime i want, honest), and then you see the person that all of a sudden stopped talking to you looking mighty cosy with someone else. You hit unfollow, and thus, the circle of life and love continues.” Cal Kramer, The Southern River Band.

‘Modern Romance’ was recorded at RADA studios, and  was produced by Dan Carroll (Carla Geneve, Grievous Bodily Calm,  Vikki Thorn (The Waifs), Jack Davies) & mastered by Grammy Award-winning Australian sound engineer William Bowden (Gotye, Spacey Jane, Kylie Minogue) at King Willy Sound. These influences see a masterful production of crunchy, gritty bass with soaring guitar riffs and powerful vocals that sees a follow up to previous single ‘Are You Up?’ and ‘Vice City II’, kicking off the first release of 2022 with a band.

They know what they want, and they have the tenacity and ingenuity to get it. In September 2021 when it was announced the AFL Grand Final was going to be played in Perth, they created the#SRBAFLGF hashtag and within 6 hours it was posted on every single WA news story on the internet, gaining both the local and state government attention resulting in lunch at Parliament house for the band. Despite the Grand Final entertainment being locked in, fans rallied hard campaigning on their behalf. This resulted in the band being offered the chance to open proceedings at the 2021 AFL Brownlow Medal Awards, which saw the band’s performance broadcast to millions of people worldwide.

Do yourself a favour, get off Tinder, crank up ‘Modern Romance’ to a deafening level and get your fix of pure Aussie rock ‘n’ roll. 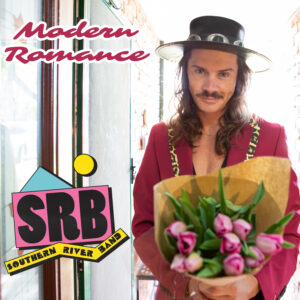 PRAISE FOR THE SOUTHERN RIVER BAND “These boys don’t fuck around, Cal Kramer is possibly the best front man in Australia.”X-Press Mag “One of the hottest bands in Australia right now”Around The Sound “The Western Australian juggernaut pumped out one of the most entertaining and genuinely thrilling performances to grace Queenscliff in years.”Beat Magazine “The Southern River Band are making a name for themselves around Australia as the cure and cause of Saturday night fever”The West Australian Newspaper