THE OKLAHOMA KID – a modern metal experience. Known for their very own blend of genres, the avant-garde 5-piece never falls shy of pushing the boundaries and breaking old conventions.

After their successful and absolute refreshing singles ‘Pale Tongue‘, ‘Melt Into You‘, ‘Come Undone‘ & ‘A Velvet Feel‘, THE OKLAHOMA KID are back with their real diverse and alternative track ‘Dye Black To Pink‘, taken from their upcoming sophomore album Tangerine Tragic, due for release on June 3rd.

After their successful debut album Solarray (2019) and struck by the global pandemic, THE OKLAHOMA KID set their focus on writing new music, with one simple goal in mind, to best themselves and give every fan something to crave for – Tangerine Tragic.

Tangerine Tragic is built on the strengths of their debut »Solarray«. It plays with new ideas and concepts, comes gentle as a breeze and strikes hard as a wreckingball. The album was recorded and produced by Jan Kerscher (Ghost City Recordings) – mixed and mastered by Lance Prenc (Alpha Wolf, Polaris, Dealer) that gives this production its full blown punch.

“We are always trying to get different influences into our music, that’s why we were looking for a producer outside our genre, to get some new input. When we first met up with Jan, we know he was a perfect match to record and produce our next album.” – Andreas Reinhard (guitar)

THE OKLAHOMA KID stands for breathtaking modern metal that bridges the gap between technical intricacy and energizing rhythms. Since their formation in 2012 the band – consisting of David J. Burtscher, Fred Stölzel, Robert Elfenbein, Tomm Brümmer and Andreas Reinhard – has consistently pushed the envelope and have established their foundation in the German metal scene. They toured the country with renowned acts such as Stick To Your Guns, Carnifex, Evergreen Terrace and Hatebreed and electrified crowds with their passionate, relentless performance.

THE OKLAHOMA KID are no longer an insider tip and a force to be reckoned with. No matter if live at a festival or on the record player in the living room; THE OKLAHOMA KID will change your perception of what metal is capable of. 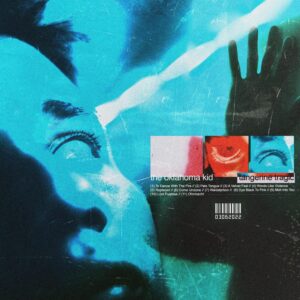