THEIR OWN UNDER 18’S

The Lazy Eyes are thrilled to present their debut festival, Lazyfest, consisting of an under 18’s show during the day, followed by an 18+ later in the evening. Tickets available HERE.

Programmed by the band with a lineup featuring Stevan and MAY-A, the festival is built on a foundation of giving younger fans a chance to see live music in real venues, and The Lazy Eyes are bringing their friends along for the ride.

The band has this to say: “Lazyfest is our vision for something we would’ve loved to have when we were younger. When we were growing up around the music scene, there never seemed to be any opportunities for the underage crowd to watch, let alone play music in “real venues”. We would find lot’s of workarounds to be able to play, some of them which will remain undisclosed ;). Shoutout to MCA Genext who put on such an amazing youths only event that really helped shape our band as well as so many others. That was a real diamond in the rough. When we were given the opportunity to make Lazyfest, we tried to satisfy every bit of our younger selves imaginations.

We met Stevan and his crew at Bigsound 2019 and it was an instant connection. We just bonded over the same music and we had mutual friends. He’s such a funny dude and we are always amazed by how much energy he has on and off stage. Stoked to have him on board. We went to highschool with MAY-A, so we had loads of run-ins with her on our long journey through school. Back then it was all about collaborating and joining everyone’s band and project to help people finish music assessments and stuff. It’s such a full circle moment playing with her again for the first ever Lazyfest!”

Lazyfest is made possible by funding from Create NSW’s Play the City (Sydney) grant. 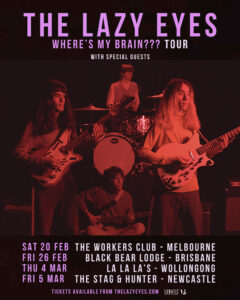 ABOUT THE LAZY EYES
The Lazy Eyes are Harvey Geraghty (vocals, guitar, keyboard), Itay Shachar (vocals, guitar), Leon Karagic (bass) and Noah Martin (drums). At 15 years old, they met at a performing arts high school which provided fertile ground to pursue their creative projects. In the time since the group have built a cult following with their magnetic live set, long before their debut single, like word of mouth wildfire. Their eventual spread soon reached the BBC’s Abbie McCarthy who aired the then unreleased ‘Cheesy Love Song’ during a takeover on Australia’s national youth broadcaster, triple j. In the year that followed, their debut EP saw The Lazy Eyes sell out headline shows, amass a combined 1.5 million streams and receive praise from the BBC, Bandcamp, NME, DIY Mag, The Line of Best Fit, i-D, Clash and many more.