It has been an unmatched year for Melbourne-based heavy outfit The Last Martyr, and the streak continues with latest single “Freaking Out”, included on their recently announced forthcoming debut EP, ‘Purgatory‘ out December 10. Pre-order here.

“Freaking Out” showcases a much heavier side to The Last Martyr, a side that the band have been working towards on previous releases. Enlisting the help of the unstoppable Chris Lalic (Windwaker, To Octavia Days Like These) on production, mix and mastering, together the team bring together a thrashing yet focussed backdrop of sounds.

The Last Martyr returned with a vengeance in April 2021 with a new single, “Hindsight“, a fierce tune with bounce that led the band to a multitude of milestones including triple j rotation and Unearthed Feature Artist, establishing the band’s unique blend of nu-metal and heavy rock.

The band followed swiftly with, “Afterglow” a hard-hitting and nostalgic bop about young love and reflection through rose coloured glasses. The track itself features a huge chorus with a twist in the form of a trap second verse. The bands carefully crafted sound found them a spot on Metal Injection’s relaunched Slay At Home monthly series in October, where The Last Martyr performed a mini live stream set to thousands of viewers.

The Last Martyr are breaking free of the Melbourne lockdowns like a force, with the first three shows of 2022 being festivals. Catch them at Unify Gathering between January 20-23, the Sydney leg of Uncaged Festival on 12 February and the rescheduled Halloween Hysteria festival on 2 April. 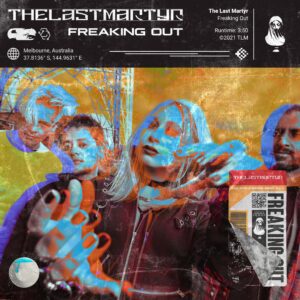