The Last Martyr wrap up their 2021 with the release of their brand new, highly anticipated EP, ‘Purgatory‘, available everywhere today and streaming now.

Enlisting the help of the unstoppable Chris Lalic (Windwaker, To Octavia Days Like These) on EP production, mix and mastering, the team successfully bring together a thrashing yet focussed backdrop of sounds.

“Hellishly good or heaven-sent, however you want to spin it, it doesn’t get more epic than Purgatory.”Hysteria Mag

“The band has managed to inject real character into each of the five tracks on Purgatory. No song sounds like the previous one, they are clearly not writing to a formula.“Sense Music Media

“[Freaking Out] shows the band ascending towards a foreboding and threatening potential.”Backseat Mafia

“Purgatory refuses to go through the motions, injecting each track with its own flavour and character.“Boolin Tunes

“There’s so much grunt and horror to [Freaking Out], you’re freaking out the whole neighbourhood with this.”triple j Home & Hosed host, Declan Byrne via Unearthed

The Last Martyr returned with a vengeance in April 2021 with single, “Hindsight“, a fierce tune with bounce that led the band to a multitude of milestones including triple j rotation and Unearthed Feature Artist, establishing the band’s unique blend of nu-metal and heavy rock.

The band followed swiftly with, “Afterglow” a hard-hitting and nostalgic bop about young love and reflection through rose coloured glasses. The track itself features a huge chorus with a twist in the form of a trap second verse. The bands carefully crafted sound found them a spot on Metal Injection’s relaunched Slay At Home monthly series in October, where The Last Martyr performed a mini live stream set to thousands of viewers.

The Last Martyr are breaking free of the Melbourne lockdowns like a force, with the first three shows of 2022 being festivals. Catch them at Unify Gathering between January 20-23, the Sydney leg of Uncaged Festival on 12 February and the rescheduled Halloween Hysteria festival on 2 April. 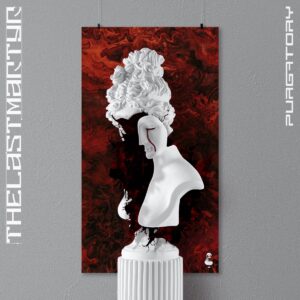 ‘Purgatory‘ is streaming everywhere today and is available now.