Melbourne-based artist Tess Hannah has long said goodbye to her Catholic choir girl days, releasing her latest single ‘Closer’ – following a story of queer sensuality, intimacy and alluring seduction. The single shows a more somber side to Tess with her brooding yet sensual vocals juxtaposed to the dark and gritty instrumental.

“Ooh yesss Tess this is so sick. it fully lures you in with the sprawling hooky lines then gives you
that skuzzy, attitude filled whack over the noggin you didn’t know you needed.”
– Declan Byrne (Triple J)

While ‘Closer’ is the third single from the EP to be released it was originally written for the sold-out theatre show ‘Pink Matter’, which took part in the Melbourne Fringe Festival in 2019. Following this, Tess Collaborated with fellow musician Sebastian Chesney (Blyolk/Bastian Hues) and St. Vincent’s drummer Matt Johnson to finish the single.

‘Closer’ shows a more sombre side to Tess while staying true to her gritty indie/rock vibes she is becoming known for.

To create the music video for ‘Closer’ Tess worked within the constraints of a 14 day COVID quarantine period. Filming the video in her bedroom with her housemates, the clip sees Tess depicted as an internet dude and a femme cam girl in the humorous representation of the male gaze.

“I came up with the music video concept when I was listening to the mix. I imagined a funny scenario where an internet dude ogles at a femme woman on his laptop screen. And thought it would be sillier if I played both characters. On a deeper level it represents the male gaze, playing up the masculine, heterosexual perspective on women.”

Tess began her music journey as a choir girl during her Catholic girl school years. While she no longer sings about Jesus this sparked her love of music. Following this Tess started messing around on guitar before studying music at Monash University.

It was during this time her music took a pivotal turn from something lighter, to talking about heavier subjects from her personal experiences as a queer woman, experiencing sexual assault, heartbreak and more. These themes can be heard in the music you hear from her today. 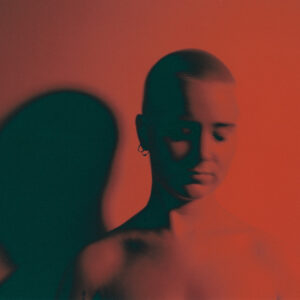