Following its First Play on triple j Good Nights, rising Australian punk stars Teen Jesus and the Jean Teasers have unleashed a brand new single ‘Miss Your Birthday’today, alongside the announce of a headline single tour slated for February 2022.

Co-written with Alex Lahey and produced by Violent Soho’s James Tidswell, ‘Miss Your Birthday’ is a slice of instantly-memorable alt-rock, and proof yet again that Teen Jesus and the Jean Teasers are an absolute must-watch rising act. Packing a punch both musically and thematically, ‘Miss Your Birthday’ touches on the idea of being comfortable in your parents’ home yet yearning for freedom out of home.

“’Miss Your Birthday’ was written during the first COVID lockdown, when I was staying in Melbourne and really homesick. I wrote it with Alex Lahey (which was an absolute dream) and we wanted to write something relatable, referencing share house couches and dirty bathrooms. It’s about the internal battle of wanting to be back at your Mum’s cosy house without abandoning your new “grown up” life. Sometimes going home is the only option!”

It comes after a stellar reception to the group’s recent release ‘AHHHH!’ and signing to Domestic La La, the label home of fellow Australian rock favourites including Dear Seattle, LOSER and West Thebarton and fellow rising stars in The Terrys and Divers.

Since its release in July, ‘AHHHH!’ has garnered over 550,000 streams, while it snared full rotation on both triple j and triple j Unearthed and landed the band on the cover of leading playlists including Local Noise and Fresh Finds.

PRAISE FOR TEEN JESUS AND THE JEAN TEASERS:

“They’ve got all the skill, swagger and scorching tunes to be the next-gen Riot Grrrl royalty that rock in the 2020s needs.” – NME Australia

“Teen Jesus and the Jean Teasers are as striking as their band name.” – Savage Thrills

“…gritty and rough-around-the-edges in the most charming of ways.” – Pilerats

“…this is a band skyrocketing into consciousness with their rambunctious energy and riot grrrl attitude.” – Beat Magazine 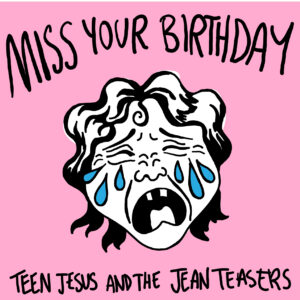 Formed during high school in their hometown of Canberra, Teen Jesus burst onto the scene in 2019 and quickly snapped attention for their teenage ragamuffin image and searingly good garage punk sound. The group cut their teeth playing festivals including BIGSOUND, Groovin’ The Moo, Laneway, Falls, Lost Paradise & Spilt Milk, supporting a slew of Australia’s finest including Polish Club, Alex Lahey, Press Club, WAAX & more, while impressing with a sprinkle of standout single releases.

As of 2021, the band have graduated into an astute group of 20 year-olds – just as concerned about issues facing today’s women and young people as they are with their loud, badass and completely cool punk sound. Announcing their signing to Domestic La La in July, the band have followed with a knockout pair of singles ‘AHHHH!’ and ‘Miss Your Birthday’.

Empowered by their youth, punk roots and a swag of inspiring influences around them (see Anna’s ex-front woman mum and Scarlett’s band manager mum, an all-female management team and a new mentor and friend in James Tidswell), Teen Jesus are real as shit girls, and they’re going somewhere. 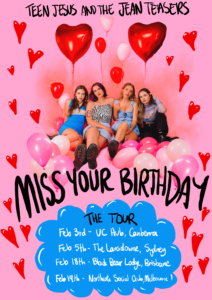 Connect With Teen Jesus And The Jean Teasers