Taylor Janzen is back with the glossy, unhinged, (and frankly) necessary cathartic anthem we need after a year like we’ve had. Melodically peppy but lyrically dark, “Push It Down” aims to highlight Taylor’s experience of feeling stuck and faking her way through a depressive episode, while simultaneously on display to her peers.

“Writing ‘Push It Down’ felt like the mental reset I’ve long needed… although in hindsight I wasn’t ready for one at the time. It came together by myself in my room — about my rapidly declining mental health amidst my quarantine-induced brain fog — then immediately put it away and forgot about it,” said Taylor Janzen.

The song is about grasping at anything to feel better, and in the process enabling all my unhealthy tendencies… things like not taking accountability when I’m wrong, impulsive behaviours, isolating myself, refusing to do things that are good for me. A behavior that is unsustainable.

I think a lot of young people are as excited about the return of normalcy, as they are nervous about breaking the now-familiar comfort and safety of less social interaction. I think “Push It Down” can be the cathartic soundtrack to the millions of young people around the world that will have to “shine it on” just a little longer.”

Janzen’s debut EP, “Interpersonal” garnered praise from the likes of Lucy Dacus, Phoebe Bridgers and The New York Times. A year later in 2019, her second EP “Shouting Matches” garnered praise from Exclaim!, NYLON, Paste, Noisey, i-D and more. Taylor then kicked off 2020 as an Official Artist at SXSW where she performed at the Rolling Stone Emerging Artist Showcase and NPR featured her in their coveted Austin 100. Her melodies and successes have not gone unnoticed as she’s landed two Lollapalooza performances this year on July 29th and will be supporting X Ambassadors on their upcoming US tour.

Growing up, Taylor wasn’t encouraged to speak through her feelings, so turned to songwriting as an outlet. As a result, with each song we’re granted an intimate and almost painstakingly brazen glimpse into the most heart wrenching pages of her diary.  She writes candidly, touching on the topics of mental health and emotional abuse, noting that, “the music that I write is very honest, so it speaks for itself.” Her talent is not lost on her audience with Music Week most recently describing her work as “unstoppable, brilliant songwriting.”

“The powerful simplicity of a voice, a guitar, a restrained melody and a raw emotion has been rediscovered by songwriters like Julien Baker, Phoebe Bridgers and now Taylor Janzen.” – Jon Pareles, The New York Times

“Produced and mixed by Mike Mogis (Phoebe Bridgers, Bright Eyes), Janzen transitions comfortably into the bigger sound, and creates a fine-tuned sound that’s a little bit folk, a little bit rock, but not at all forced—it feels like she’s found exactly where her literal and lyrical voice is meant to flourish.” – NYLON

“Sombre but never down beat, her hushed tones and fragile take on Americana is worth filing alongside the likes of Phoebe Bridgers, but – truly – she’s working in her own lane.”
– CLASH 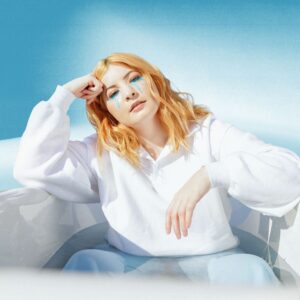 “Push It Down” is available on all platforms now.