With the ever-growing talent flourishing in the Australian electronic scene, Sweat It Out is today excited to announce an ongoing partnership with Apple Music to present a brand new mix series ‘Sweat Selects’, kicking off with pillars of the scene itself SLUMBERJACK.

Each month ‘Sweat Selects’ will see the release of an exclusive mix onto Apple Music from local artists, with the aim to support homegrown Australian talent both on and off the Sweat It Out roster.

Each mix will see the featured artist build a tracklist and moment around a chosen theme, with the debut edition of ‘Sweat Selects’ seeing SLUMBERJACK set the pace with a bass-driven 45 minutes of all gas and no breaks, honing in on tracks that offer something completely left field to the status quo.

Shifting from electronic pop, into future bass, hip-hop and drum & bass, SLUMBERJACKshowcase their ability to converge different stylings into a meticulously formed sonic journey. With a tracklist that spans tracks such as Dog Bloods’ ‘Break Law’, fellow Sweat It Out family member What So Not’s remix of Run The Jewels’ ‘jus$t’ and finishes with Skrillex, Noisia, josh pan, and Dylan Brady’s ‘Supersonic’, the pair have strived to collate a mix filled with tunes that have a distinctive eccentric edge.

On the premise behind their selections, SLUMBERJACK said, “With so much music being churned out weekly, we are constantly striving to find tracks that keep us on our toes and surprise us – a novel sound, a new rhythm or something completely unexpected. This mixtape is a collection of such gems, where artists have rejected the status quo and built something unique.”

Following SLUMBERJACK’s lead in the coming months will be the multi-talented recent Sweat It Out signing Annie Bass, and Club Sweat’s Mell Hall, who recently broke the record for most consecutive weeks for a female artist at #1 on the ARIA Club Chart.

SLUMBERJACK’s ‘Sweat Selects’ concentrates on the extraordinary and unpredictable, and is in line with their own mantra as producers, something they look to represent in their upcoming debut album ‘DICHOTOMY’ set for release on January 21st 2022.  Pre-add on Apple Music HERE. 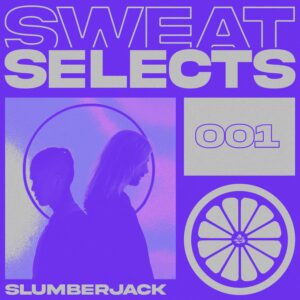