About State Champs’ new era, DiScanio shares, “It feels amazing to be back, and we’re just getting started. “Just Sound” is the perfect introduction to the new age of Champs. Fast, catchy, and edgy are what we’ve always been known for and this one takes it to the next step. If you’re wondering what the song is about, use your imagination, listen to the lyrics, and I’m sure you can figure out the subtle, yet not-so-subtle meaning. As far as the video goes, I’m still trying to figure out how the rest of the guys convinced me to do this one… Let’s go ahead and call it “motivational pressure” to not take ourselves so seriously and just have fun with every step along the way.“

State Champs are hitting the road next month, headlining the 2021 Pure Noise Tour with support from labelmates Four Year Strong, Real Friends, Just Friends and Bearings. The 24-city tour kicks off on September 14.

“We are heading back on the road to headline the Pure Noise Records Tour this September-October. It’s been too long since we’ve been able to do what we love and see everyone in the US,” shares Vocalist Derek DiScanio. “Expect this one to be extremely special as we will be with plenty of good company including Four Year Strong, Real Friends, Just Friends, and Bearings. Get your tickets quick!” 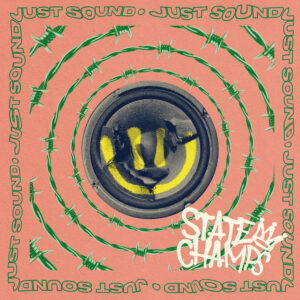 State Champs has always embraced the idea of getting their music in front of as many people as possible. They aren’t running away from the sound they’ve established; if anything, it’s that scrappy punk spirit that drives them to continue to reach further and further. They’ve done pop arena tours, metal tours; they’ve even played a show on a beach. Wherever they turn up, they are going to be sincere and passionate. They are going to have fun. And moreover, so will you. This is an arena-ready band, capable of moving any kind of crowd, with the heart and soul of DIY freedom.

State Champs released their latest EP State Champs Unplugged in the summer of 2020 via Pure Noise Records. Featuring four new songs as well as two fan-favorite tracks from Living Proof, the EP is reflective of the diverse listening habits of the foursome, unapologetic about their love of everything from Pop to Country without sacrificing the upbeat enthusiasm of the central influences that first moved their collective souls. State Champs Unplugged is available to purchase at https://smarturl.it/StateChampsNY.