Starflyer 59 releases a new short film in support of their latest single Life In Bed, and ahead of their upcoming single Like To Lose out now, via Velvet Blue Music.

The short was written and directed by Hunter Christy, whose previous work includes videos for Guided By Voices, Fine China, and Nicole Yun.
The band suggested to Christy something evocative of the iconic 1960’s tv show the Twilight Zone. When writing the film Christy says “I decided to focus on the lyrical elements of the song that evoke a feeling of something simmering just below the surface, and wove it into an idea that humans can influence and impact each other, even when actively trying not to. We can share positivity, but we can also share trauma.” The resulting film feels like a dark inversion of A-Ha’s classic “take on me” video for the “It Follows” generation.
The melancholy nature of “Life in Bed” blends perfectly with cold and haunted imagery. Elements of the song are woven into an elongated soundtrack, with the actual album version of the song not entering until the 6:45 mark. Singer / songwriter of the band Jason Martin states that “Life in Bed” was written during a period last year where he was suffering from a medical condition and was hospitalized for a period of time. He recalls constantly dwelling on the idea that he was stuck in place while everyone else was moving on with their lives.

The new single LIKE TO LOSE is available as a beautiful deluxe flexi 7″ here. It will be available on all streaming sites on 7/09. 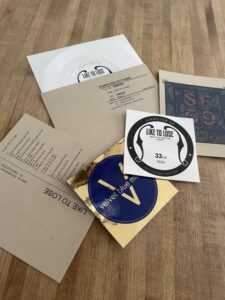