With infectious energy & charming demeanors, Perth indie-rockers South Summit have returned from their breakout singles ‘River Days’ & ‘Runaway’ to hit their stride with their most prolific release to date, ‘Tired of Waiting’. The quintet have been plying their trade for less than three years now, operating with a songwriting maturity that belies their youth. ‘Tired of Waiting’ marks the continued refinement of the South Summit “sound”, emerging from sparkles of reggae, rock & indie with the band performing with a sharpened clarity across the entirety of ‘Tired of Waiting’. Soaring lead lines are blended with reverberant guitars, whilst the enigmatic frontman Isaiah Reuben sings of haunting themes of heartbreak.

With the band celebrating the past 6 months hitting SOLD OUT headliners at Jack Rabbit Slims & Badlands in Perth, as well as upcoming festival appearances at Out Of The Woods in Busselton & Festival of the Stone in Byron Bay, South Summit pushed themselves to have a festival-ready track for their upcoming appearances, ideally placed to whip up a flurry of revelry as the sun goes down across their festival performances.

Returning again to the renowned Blackbird Studio in Perth, the band teamed up with the illustrious Dave Parkin (Spacey Jane, Tired Lion) to spend the autumn of 2022 writing, recording & producing the track, across 3 days in his studio. With the experienced hand of Parkin guiding the band to sharpen their sound & focus on their craft, ‘Tired of Waiting’ was born from the collective effort and drive resonating from all of South Summit’s members.

“The meaning of the song itself is about the realization that this person you thought you needed to depend on to be loved, was actually dragging you down and keeping you lost in a state of confusion through their manipulation and unreliability. The progression of the song then continues to a point where enough is enough, it’s time to take a stand and distance myself from this situation that is holding me back from independence, because I’m tired of waiting. This independence then gives you the ability to achieve a happiness that comes from self-love and the freedom it brings.” Fynn Samorali, South Summit

“Creating music in the studio is our favorite thing to do as a band. Our process starts with taking demos from home into the studio , then we turn them into a more tight and polished product. Scratchie day at the studio helps the process by allowing us to have a full day of working on song structure , tempos and individual parts to get closer to the end product. Having Dave’s input has helped us steer into different directions and think different , and this always ends up with a better song then when we walked in” Josh Trindall, South Summit

Having landed a coveted position in triple j Unearthed ‘Ones To Watch in 2022’ list, alongside a triple j Unearthed feature artist slot, with support from Spotify Australia (Original Storytellers, The Local List) following, there’s no doubt these shows will be a spark that ignites the flame for countless future tours across Australia, to fans eager & waiting to bask in the glow of South Summit’s glorious live performances. Taking the success of previous tracks ‘River Days’, ‘Runaway’ & now ‘Tired of Waiting’, the band are ardent & ready to storm Australia with a run of shows that sees them performing at Festival Of The Stone in Byron Bay, debut headline performances in Melbourne, Sydney & Brisbane, as well as reaching out to regional WA with gigs in Margaret River, Exmouth, Bunbury & Busselton.

“Our upcoming tour is definitely one of the highlights of our career so far. Traveling to play a show has always been a dream of ours and it all seems a bit surreal. Due to current COVID restrictions, it’s actually easier to play a gig over East than Perth, giving us a really good opportunity to play around the country and get our name out there.” Nathan Osborne, South Summit

The indie-rock quartet are on the precipice of a breakout year, with single ‘Tired of Waiting’ positioning them as the potential festival “must-see” act of 2022.

“The band mixes timeless psych influences with a dusty mysticism, like each electric lick is a chance to escape being young and big for your boots in isolated WA. It’s still early days for South Summit but there’s so much promise of what’s to come with this band. Imagine a dark and brooding Ocean Alley cut and you’ve got the vibe of their new one ‘River Days’. It’s dreamy, soaring coastal indie with big guitars and swelling vocals”

“They’ve become ingrained within live music spaces in such a short time that it feels like they’ve almost been there; their heartfelt indie-rock being an easy fit into the growing next generation emerging from Western Australia.”

“This track had me from the first strum of the guitar. Definitely feeling an Ocean Alley vibe in this track. The production is slick and I’m just loving it!”

“Really feeling that Ocean Alley influence on the second half of this big jam from South Summit. It’s ambitious, invigorating indie!”

“Epic track right here – it’s got a little bit of everything! Gentle folk harmonies, yearning blues and then a swirling dubby climax. These competing parts of South Summit could seemingly overpower the track but this band nail the mix.”

“There’s something so special here. Sure, it’s got a lot to do with Zaya’s beautiful voice and the heart-wrenching lyrics, but I think it’s all in how South Summit blends it all together that makes it so magical.” 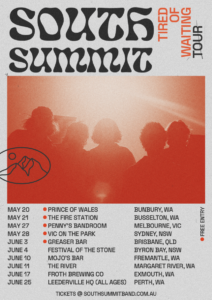 Sat May 28th Vic On The Park Sydney*

‘Tired of Waiting’ is out Thursday, April 21st 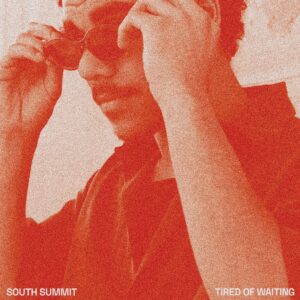