Featuring previously released A-list tracks “bank on me“ and “bananas“, the five-track EP includes SonReal ’s forthcoming new single “right before my eyes.” Produced by Trevor Muzzy and written by Aaron Hoffman (aka SonReal), the EP displays SonReal ’s exquisite ability to consistently be versatile, and once again showcases his extraordinary talent for songwriting and storytelling in addition to pushing boundaries in both his music and incomparable visualisers.

LISTEN TO “I CAN’T MAKE THIS UP” HERE

On the EP SonReal shares, “This EP was a very full circle moment for me because I recorded the majority of it by myself which is how I started making music. Something is special about this body of work to me. My producer Trevor and I were forced to think outside the box.

I had to get back to recording my own vocals in a bedroom. No flashy studio, nobody to do the work for me. There’s something special about that and it made me hungry to be better. Though this is only 5 songs it feels like a mini album and shows what we are capable of. This is only the beginning. I can’t make this up.”

The EP I can’t make this up follows 2019’s critically acclaimed The Aaron LP an artistic statement that presented SonReal ’s growth not only as an eclectic singer-songwriter, but as a genre-bending artist able to navigate folk-tinged acoustic ballads and intensely personal hip-hop joints with ease. I can’t make this up continues to highlight SonReal ’s “fiercely ambitious” (The Georgia Straight), and uniquely intrinsic ability to stay adaptable and genre-agnostic, creating a visionary world within his music one song at a time. 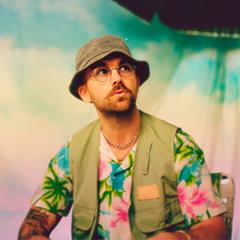 The EP features the focus track “right before my eyes” which steers more in the direction of pop than SonReal s other bodies of work. The track portrays husky soulful vocals that urge the listener to feel a full range of emotions. Although SonReal is exploring other sounds the remainder of the EP stays in the lane of hip hop, where he has found the majority of his acclaim.

“right before my eyes is a song I always knew I would write. It’s about life and how you can never fully decide how it unfolds but you can trust yourself and do your best. It has multiple layers and meanings to me but it’s a song I wanted to let the listener feel & relate to the lyrics as they wish,” said SonReal.

SonReal started 2021 off strong with the releases of  “Bank On Me” and “Ride.” “Bank On Me” has amassed over 1 million global streams and 1 million video views. With a groovy visualiser and uncontained vibes, his second single this year “Ride” has almost 300,00 streams on Spotify.  With more than a dozen award nominations under his belt, four of them being Juno awards, SonReal is back and ready to flood the market with new music.

“Bananas” the most recent single from SonReal, which is included in the EP received over 100k streams in its first week alone. The track harnesses SonReal ‘s fresh, low-key hip hop influences and eternal inner light that are showcased all throughout his I can’t make this up EP.

SonReal is the moniker of Canadian singer, songwriter, rapper and visual artist Aaron Hoffman. With years of international touring, more than a dozen award nominations, nearly 125 million views and over 165 million global streams to his credit, Aaron has made a name for himself as SonReal.

Bursting onto the scene with the quirky, now-viral video sensation “Everywhere We Go” (22M views), SonReal and his team set a high bar for visual content and songwriting. EPs and mixtapes followed suit, featuring songs and next-level videos like “Preach” and “For The Town” before SonReal ’s full-length debut in 2017, One Long Dream.

Often told that his versatility and genre-bending tendencies are an obstacle, SonReal has always stayed true. Constantly pushing boundaries in his music and in his visuals, he has always aspired for more. Tracks like the Platinum-certified single “Can I Get A Witness” and “Problems” from One Long Dream were the first indication that SonReal had more to say as a songwriter, and more to accomplish as an artist.

I can’t make this up EP is available on all platforms now.

i can’t make this up EP tracklisting
1. right before my eyes
2. bananas
3. daylight savings
4. bank on me
5. wide awake 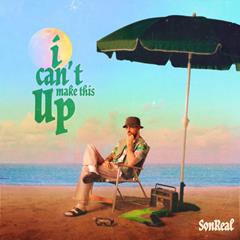