FINAL EP ‘THE STREET OF

Today marks the bittersweet end of Melbourne duo Slum Sociable. Their final release The Street Of Dire Needs EP is out now via Liberation Records.

The five-tracker features singles ‘Explain Myself’, ‘You’re In My Head (feat. KYE)’ and ‘Questions’ as well as title track ‘The Street Of Dire Needs’ and ‘Lookin’ Up’. These final two are greatly significant songs for Ed Quinn and Miller Upchurch, who penned ‘Lookin’ Up’ 10 years ago in their previous musical manifestation.
“It feels right that these songs are the last we’re going to release. Lookin’ Up was the first song we wrote together (during the good ol’ Cold Hiker days), and The Street of Dire Needs was the last song we wrote. We couldn’t be happier with how this EP turned out, and The Street Of Dire Needs is probably my favourite song Slum has ever done.”
– Ed Quinn

LISTEN: ‘Lookin’ Up’ by Slum Sociable

The much-loved duo shared the news of their breakup to socials in March with the message, “we’re excited to move onto the next phases of our careers/ life, and thank you all for your love.”

From their break-out debut EP TQ in 2015, to their acclaimed self-titled debut full-length, to their popular L.I.F. EP, Miller Upchurch and Ed Quinn have proven to be a quintessential pairing. The duo has given us radio gems like ‘All Night’ and ‘Afterthought’ along with fan faves such as ‘Do Something About It’ and ‘Castle’. From the beaches of Melbourne’s south, they have mixed it with the very best, playing the Splendour In The Grass and Falls Festivals locally, plus SXSW and The Great Escape abroad. Throughout the course of their journey, they have accumulated streams of over 25 million across DSPs. They’ve clocked spins on BBC Radio 1, Beats 1 and KCRW, in addition to triple j and community radio locally, and have won praise from the likes of Billboard, NYLON, CLASH, Earmilk, Indie Shuffle, Pilerats and Purple Sneakers. And of course, who could forget their joyous, raucous Christmas show from 2018?

With the release of this final EP, we bid Slum Sociable adieu with full but heavy hearts. 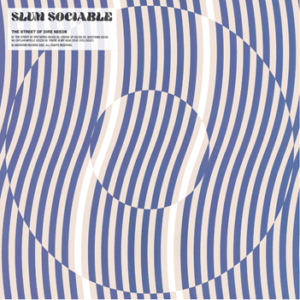