Fresh off releasing their driving single Nothing On back in February, Melbourne indie dynamos Slowly Slowly bounce back with an alternate version of that very track, bringing singer-songwriter Shannen James into proceedings with lush and languid results.

Evolving from an unreleased acoustic version of the single, the alternate Nothing On burrows deeper into the track’s elegant melodics and intrinsic nuances, fusing Slowly Slowly’s effortless hypnotism into a far more intimate setting.

CLICK BELOW TO WATCH THE VISUALISER FOR ‘NOTHING ON’:

Boasting humid beats, stripped-back instrumentals and the addition of James and her creamy vocals alongside Slowly Slowly frontman Ben Stewart, Nothing On‘s sister track retains the same sonic spirit and narrative of the original, while blossoming into a sensuous slow-burner that bewitches the soul.

Working with James and also with producer Simon Lam, Stewart was able to collide creative worlds on this latest release, resulting in some modest yet natural stylistic shifts, as Stewart explains: “This alternate version came about in quite a natural way – Shannen and I have been friends since she supported one of my solo acoustic shows in 2020. I’ve been a huge fan of her work and really admire her songwriting.

“Simon Lam is also a good friend who has worked on some of my favourite releases over the years (Kllo, Armlock). We had an acoustic version of the song (just the very basic bones) kicking around for a while as we wanted to showcase Nothing On in a different context that highlighted the romance in the song; the original is quite fun and I knew there was a more delicate version of it in there somewhere. Simon’s production and Shannen’s voice helped tease that out in a way that maintained a hypnotic groove, but that shaped the narrative a little more towards intimacy. It feels like a windows down cloudy hot summer afternoon before rain now as opposed to the original, which to me feels like blue sky and hot sun.”

The alternate version of Nothing On is officially out today on UNFD, and Slowly Slowly will also be christening the track’s moniker live in action in April and May, with a run of capital city shows set to delight fans around the country.

Along for the ride for the Nothing On Tour will be Shannen James as main support for all shows, and an array of locals at each stop, including: Juice Webster & Armlock in Melbourne, Rest For The Wicked in Sydney, Friends of Friends in Brisbane, Agapanther in Adelaide and Duck Teeth in Perth.

LISTEN TO THE ALTERNATE VERSION OF ‘NOTHING ON’ HERE 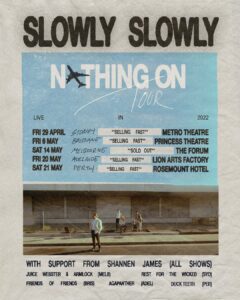 ABOUT SLOWLY SLOWLY:There’s an unshakable sense of comfort and resonance that comes with listening to Slowly Slowly. Frontman Ben Stewart’s vivid lyricism and emotionally-charged vocals douse swirling guitars and soaring percussion and prove the band as nothing short of striking storytellers. At any moment fragile and raw to boisterous and belting the next, the four-piece – completed by Alex Quayle (bass), Albert Doan (guitar) and Patrick Murphy (drums) – effortlessly capture real life and turn it into a rock song.

In early 2020 and 2021 respectively Slowly Slowly released their the two adjoining parts of their double-album effort Race Car Blues & Race Car Blues — Chapter 2 to a tidal wave of success. Beyond gracing magazine covers and claiming Feature Album slots from triple j, Tone Deaf and The Music, the band enjoyed a rinsing on national radio and kicked off a string of sold-out Australian shows.

On the back of their most successful single to date, Blueprint released in May and mounting critical and fan rapture ensuing, Slowly Slowly continue to stake their claim as one of Australia’s most vital rock outputs of late.