Australian rock favourites Slowly Slowly are bringing the good news of their 2022 ‘Nothing On’ national headline tour today.

Following the easing of restrictions and Ben’s recovery, the Nothing On tour will see Slowly Slowly bring a swag of new stories (and new music) to some of the biggest stages of their career.

Going down in May next year, the band are set to grace their hometown’s beloved Forum for the first time, while also stopping by Sydney, Brisbane, Adelaide and Perth in what will no doubt be a spectacle of shared elation for the band, their faithful fans and newcomers alike.

Fan pre-sale tickets to the Nothing On Tour are on sale now, before general on sale kicks off at 12pm AEDT this Wednesday November 24 via slowlyslowlyband.com/tour

Slowly Slowly also appear at UNIFY, going down in January 2022. 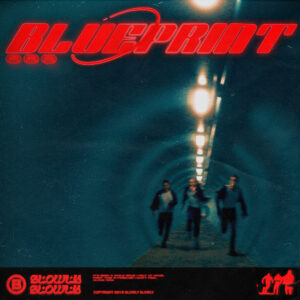 About Slowly Slowly:There’s an unshakable sense of comfort and resonance that comes with listening to Slowly Slowly. Frontman Ben Stewart’s vivid lyricism and emotionally-charged vocals douse swirling guitars and soaring percussion and prove the band as nothing short of striking storytellers. At any moment fragile and raw to boisterous and belting the next, the four-piece – completed by Alex Quayle (bass), Albert Doan (guitar) and Patrick Murphy(drums) – effortlessly capture real life and turn it into a rock song.

In early 2020 and 2021 respectively Slowly Slowly released their the two adjoining parts of their double-album effort ‘Race Car Blues’ & ‘Race Car Blues — Chapter 2’ to a tidal wave of success. Beyond gracing magazine covers and claiming Feature Album slots from triple j, Tone Deaf and The Music, the band enjoyed a rinsing on national radio and kicked off a string of sold-out Australian shows.

On the back of their most successful single to date, ‘Blueprint’ released in May and mounting critical and fan rapture ensuing, Slowly Slowly continue to stake their claim as one of Australia’s most vital rock outputs of late. 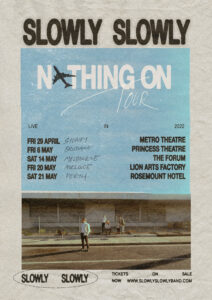