Fresh from their signing to UNFD and first new music in over 6 years earlier this month, Short Stack are backing it up with the reveal of ‘Burn You Down (Acoustic)’ today. Meanwhile, fans can also head to 24 Hundred to grab a limited Burn You Down 7″ featuring the original & acoustic versions.

Causing a stir with industry and fans with their new music, ‘Burn You Down’ has amassed over 88,000 streams, radio pick up from the likes of Triple M, triple j and US Rock Radio and press from Rolling Stone Australia, NME, The Music, The Industry Observer, Blunt, Dead Press, Bring The Noise + more.

Short Stack celebrated their rebirth with an intimate show at Sydney’s Crowbar which sold out in a matter of seconds. Meanwhile, the band will play their rescheduled headline tour later in 2021 – keep up to date with Short Stack’s socials for more details soon.

The original ‘Burn You Down’ found Short Stack embracing their hardcore roots at last, offering screams and riffs never before heard from the trio. Today’s acoustic cut dials down the intensity completely and lets the band’s softer side shine.

Short Stack frontman Shaun Diviney explains that thematically, ‘Burn You Down’ is part a reflection on the breakdown and rebuilding of the band and part observation on the world around them.

On creating its acoustic cousin version, he adds:

“We were blown away with the reception to ‘Burn You Down’ and it was really exciting for us to completely reimagine the song acoustically  for the vinyl release. We produced the track entirely ourselves in Bradie’s home studio and approached it as turning the most aggressive, heaviest song we’ve ever released into something soft and beautiful.”

CLICK BELOW TO LISTEN TO ‘BURN YOU DOWN’ (ACOUSTIC)

On their comeback to music, Diviney explains how everything about how the band approached recording this time was different.

“I think a lot of bands at the time when we first broke out were put together by labels and a lot of people threw us in that basket, but we were just a bunch of dudes that went to high school together and played Blink covers and it snowballed from there.

“To go back to our roots now and really just strip things back and play together in a room was really important to us. The reason we broke up was that it just wasn’t fun… it’s been a fair chunk of time now, so coming back finds us in a different stage of life with a different idea about what we want out of music.”

CLICK BELOW TO WATCH THE MUSIC VIDEO FOR ‘BURN YOU DOWN’

From beginnings in a Budgewoi garage at 16 to their explosive debut album ‘Stack Is The New Black’ at just 20, Short Stack quickly made a playground of the Australian landscape and were one of the biggest names in the country by the late ’10s. Beyond ascending to #1 on the ARIA Album chart with their debut record, the band claim credits including Channel V’s Oz Artist Of The Year (twice), a coveted Rolling Stone Magazine cover, two certified Platinum records and tens of thousands of tickets sold throughout their career.

‘Burn You Down’ (Acoustic Official artwork below) is out now via UNFD. Stay tuned for more details on the band’s upcoming rescheduled Australian headline tour. 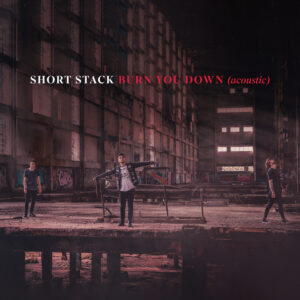