Australian rising star Sheldon Riley has returned with his latest single “Left Broken,” an avant-garde, high fashion glance into the establishment of his authentic sound. Coming off the high of his triumphant appearances on the Australian knock-out television series The Voice (plus The Voice All Stars) and the US hit series America’s Got Talent, Sheldon has well and truly broken his way into the music industry.

With a mesmerising and emotional sound, “Left Broken” is an introspective, vulnerable prize centred on feeling unwanted, unanswered and ultimately incomplete after a breakup. Inspired by heartbreaking, acoustic, live performances such as “My Mind” by Yebba, “Chandelier” by Sia and “I Love You” by Billie Eilish, Sheldon is baring his soul like never before.

“I grew up in a very religious family.. with that, came a lot of restrictions to my exposure to many things including music, film, etc. I remember I was at an Aunt’s house at a young age when I first sat and watched the movie ‘Edward Scissorhands’. I knew nothing of the film other than the fact I wasn’t supposed to be watching it,” said Sheldon. “However, I could not look away as the mystery of this sad broken man with scissors for hands was completely breaking my heart.”

“When I was writing ‘Left Broken’ I was originally writing about a relationship that ended and left me pretty heartbroken. However, I’m a visual singer/songwriter, I love to hide my heartbreak behind masks and stories. The idea of this scissor handed man, who was left so incomplete through the movie with no ‘happily ever after’. I really connected to that and how most times there really isn’t a happy ending to heartbreak,” said Sheldon.

The artwork for “Left Broken” features Sheldon wearing a custom made mask from San Francisco based avant-garde fashion designer Lance Victor Moore. Moore has been creating masks for over 5 years and featured in major publications including the cover of Billboard magazine (Lady Gaga), Vogue Arabia (Mila Jovovich). Moore’s high fashion custom made masks have been worn by Lady Gaga at the 2020 VMA Awards, during her performance and fashion moments. Gaga’s stylist Marta Del Rio asked Moore to create two custom designed masks for the music video for her latest single “911” from her album Chromatica.

At 22 years young, Sheldon Riley is already an Australian household name. In 2018 Sheldon’s bold sound elevated him to the grand finale of The Voice, and then again to The Voice All Stars 2019. Since then, Sheldon has grown to become one of the most streamed/viewed contestants in The Voice Australia history. These successes lead to Sheldon’s invitation to be featured on America’s Got Talent 2020 where he wowed judges Howie Mandel, Heidi Klum, Sofia Vergara and Simon Cowell, setting his path towards the finals. Impressing audiences and music big shots alike, even receiving praise from Billboard, commenting: “Sheldon Riley hides his face behind a mask, but there’s nothing shy about his performances.”

After being sent home from America due to the safety concerns of Covid-19, Sheldon is continuing his rise. Off the back of impressive performances between Australia and the US, Sheldon released his debut single “More Than I” in late 2020, setting the tone for his original sound. Showcasing his captivating vocals, formidable songwriting abilities and exquisite style and soundscapes, “More Than I” is representative of Sheldon’s own truth and the instincts and intuitions that co-exist.

Coming into his authentic sound and style, Sheldon has been working tirelessly with creatives including mentors, producers as well as fashion, hair and makeup experts to enhance his artistic development. “Left Broken” is a polished, stylish sample of Sheldon Riley’s genuine self. 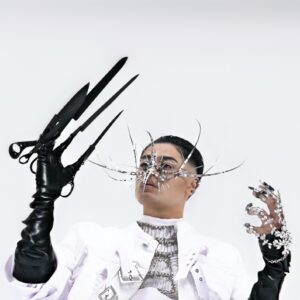 “Left Broken” is available on all platforms now.