SA.MAY embraces the New Year and delivers another hit of dreamy pop in ‘Something‘

Turning heads in 2020 with her single ‘Easier’, Sydney songwriter and producer SA.MAY is back to deliver the next instalment of what’s becoming a strong new body of work.

In her new track ‘Something’, SA.MAY is back at her hazy, captivating best as she navigates lyrical territory centered on new relationships, new possibilities and new experiences still to come. The song is a  fitting release for the New Year, as SA.MAY (as well as the rest of us) look forward to an infinitely better 12 months ahead, with 2020 well in the rearview.

‘Something’ was written and recorded at SA.MAY’s home studio in Sydney’s Northern Beaches, before being sent to Brooklyn-based producer Tiger Darrow for mixing and added instrumentation; while Andrew Edgson (Matt Corby, Amy Shark) completed mastering at Studios 301.

As with ‘Easier’ last year, this new release from SA.MAY has been a great opportunity for the artist to explore some new creative directions and add more tones and textures to her multifaceted artistry. The music brings emotion and heart together with production flair; a musical touch akin to the likes of The Kite String Tangle and Collarbones. ‘Something’ melds ethereal pop with woozy production, with SA.MAY’s vocals hypnotising throughout. 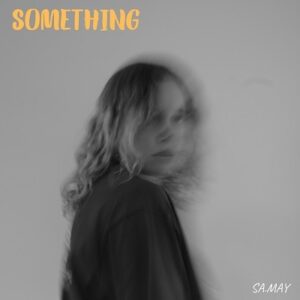 “We’re only a few days into 2021, but we might already have a contender for song of the year by way of ‘Something’, the latest single from Sydney songwriter and producer SA.MAY”
Tonedeaf (‘Something’)

“It’s a woozy and hypnotic one; there’s a bit of BANKS meets Tash Sultana in there as it encircles you.”
Triple J, Declan Byrne (‘Easier’)

“She melds her delicate, airy voice with both gentle plucks and thumping production for a listen that’ll have you hooked until the very end.”
Music Feeds

“When we talk about artists like Alison Wonderland hopefully inspiring other young women to enter the production game, people like SA.MAY are who we’re talking about.”
Pilerats

“With her next track right around the corner, [2019’s] set to be a new era for SA.MAY, one that we’re sure will take the local producer and selector to some pretty stellar places!”
Purple Sneakers

‘Something’ is OUT NOW!!

One thought on “SA.MAY embraces the New Year and delivers another hit of dreamy pop in ‘Something’”