The extraordinary year marches on for RÜFÜS DU SOL who lastnight took home the ARIA awards for Best Group and Best Dance Release, with a performance of their song Alive (from their sold out Banc of California stadium show) broadcast as part of the awards ceremony.  The Aussie electronic trio also this week picked up a Grammy nomination for Best Dance/Electronic Recording for Alive, their third Grammy nomination in the last two years.

“We’re truly humbled to take out two ARIA’s amongst such great company in both categories – it means so much to us to be recognised at this level,” enthuses the band,“It’s such an exciting time for Australian music right now and to be a part of that community that’s translating overseas, it really means a lot to us. We can’t wait to come back home next year to play live for everyone.”

“And we’re incredibly grateful to be nominated for a Grammy Award for Alive. We wanted to lead with this song as our first new piece of music after the pandemic, as it felt like the right mix of melancholy and hopefulness that spoke to the shared experience of the past couple of years for us.  We still get the same feeling when we play it live and see the crowd reactions.  We’re eternally thankful for everyone who’s been a part of our journey thus far, particularly our co-producer Jason Evigan and mixing wizard Cassian for their role in this song.”

The ARIA wins and Grammy nomination cap off what has been an unprecedented year for RÜFÜS DU SOL – dropping their anticipated fourth studio album Surrender which debuted at the top of the ARIA charts last month, announcing their biggest home tour yet with Sydney and Melbourne shows selling out before tickets even had the chance to go on sale to the general public, performing On My Knees on Jimmy Kimmell Live!, headlining some of America’s biggest festivals Governors Ball (NYC), Austin City Limits, III Points Miami and Outside Lands San Francisco, and finishing up their extensive North American tour (which included 3 shows at LA’s Banc of California Stadium, performing to 70,000) last weekend.

Tickets to the Australian national tour are on sale now and are moving fast with the band selling out their Sydney and Melbourne shows, and announcing second shows in these markets. This tour will provide the only opportunity for fans to witness the phenomenon that is RÜFÜS DU SOL live in Australia in 2022 and will kick off at Brisbane Showgrounds on November 26, before taking in Sydney’s The Domain on December 2 and 3, Adelaide’s Ellis Park/Tampawardli on December 10 and Melbourne’s Flemington Racecourse on December 15 and 16, before finishing up at Perth’s Langley Park on December 17. Tickets are on sale now via Moshtix. 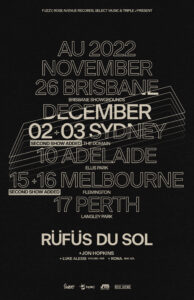