Richard Clapton is celebrating his highest-ever chart position as Music Is Love (1966-1970) debuts at #3 on this week’s ARIA Chart.

Richard says, “from the very beginning this album has been a labour of love. Because I’ve never done an album of covers before it was quite challenging. But thanks to the band, Terry Blamey, Michael Gudinski and the great team at Bloodlines we were in for the long haul and this fantastic result makes it all so worthwhile. But the bottom line is the fans, who have supported me for half our lives and it is them who really made this happen. We had so much fun making this record and I hope you have as much fun as we did! Long may you run!”

Bloodlines director and co-founder Warren Costello says, “it has been an absolute privilege for the Bloodlines team to assist Richard in bringing his extraordinary vision for this album to life. Michael Gudinski insisted the album be released through Mushroom as soon as his good friend Terry Blamey mentioned it, and long before a single chord had been struck. And it’s doubly pleasing for the Mushroom Group, under new CEO Matt Gudinski, to give Richard Clapton his highest ever album chart debut in the iconic Australian’s illustrious music career.”

Music Is Love sees Richard Clapton go back to his roots for an album of covers of classic 60s songs that sound tracked his youth. The album is receiving high praise from fans, who find themselves transported to the summer of love.

Richard Clapton was inducted into the ARIA Hall Of Fame in 1999. He is rightly revered as one of our finest songwriters, responsible for iconic songs such as ‘Girls On The Avenue’, ‘Deep Water’, ‘Capricorn Dancer’, ‘I Am An Island’, ‘The Best Years Of Our Lives’, ‘Lucky Country’, and ‘Glory Road’. Music Is Love is his first album released via Mushroom Group since 1984’s Solidarity, which was released on Mushroom Records. 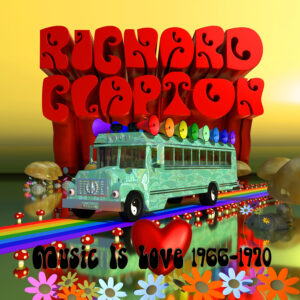