The release of ‘Acid Dent’ comes as the West Coast firebrands prepare for not only the release of their new album, but a long-awaited return to live touring; with already announced dates for North America, Europe and the UK.

A pure avenue for escapism, ‘Acid Dent’ leans into the effects of, well, psychedelics, as McEwan takes listeners on a trip of his own.

“My goodwill ‘Drugs are bad for you kids’ song. And to be perfectly honest they probably are. But good luck telling that to the youth of today I tell ya! It’s not like that safe ‘60s pot we used to smoke. Not like the prescribed methamphetamine us ‘50s housewives were doing! Not like that Cretic Wine us Romans would devour.

Every generation has their means of escapism and for some reason here in Perth, or at least when we were in our heyday you could purchase mushrooms and acid from any decent supermarket. So it’s inevitable we’re gonna be munching jumpers and chatting to fences in a few decades, but as for now, well… we’ve seemed to somehow milk a career out of it. Who’d have thought. But yeah, it’s probably not going to end well, hence my newly appointed position on drug safety. Then again, someone also once told me, “Hell hath no fury like a man who’s pressed pause on his drug abuse”, so now I’m slightly more perplexed as to where I stand. Anyway, good luck to everyone, enjoy yourselves but remember nobody wants to pick up your marbles after.” JACK McEWAN, PSYCHEDELIC PORN CRUMPETS

“I’ve always been a fan of the the horror sub genre ‘ MELT MOVIES ‘ films like Street Trash, The Blob and Body Melt. So when I was given the title of the track, I knew what I wanted to do right away. A simple story of a guy who after a freak accident is granted the powers to melt everything he touches and how it escalates in a comedy of errors throughout the video. Think the Skittles advert only more gruesome.” Oliver Jones 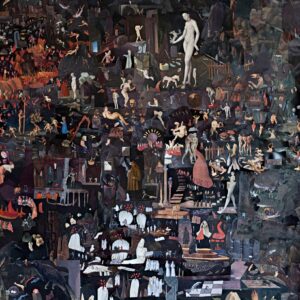 “…an atomic blast of a listening experience, featuring some of the band’s fastest, loudest material yet.”
Triple J (SHYGA! The Sunlight Mound)

“…a carefully curated narrative of psych-rock that delves deeper into the sounds presented on their previous releases.”

“…one of Perth’s finest exports and most inventive bands…”

Thursday, August 25th Band On The Wall Manchester SOLD OUT

With support from Acid Dad (except Atlanta)
Tickets through www.psychedelicporncrumpets.com