New wave dream rockers PRETTY BLEAK have today announced their new single like you know better, a sparkling, seething belter of a song, inspired by a conversation with the reflection in the mirror – out no. PRETTY BLEAK, consisting of friends Sam Thomas, Sanji Aneja, Cherie Bridgman and Kyle Charleston, have been carefully honing their craft since the release of their 2021 EP BLOOD. The band will be celebrating the release with a launch show at Melbourne’s iconic Workers Club on June 2 with support from Lashes and GUTTERBOY – tickets available now.

like you know better draws upon a rich source of influences – beabadoobe, Kisschasey and even electronic royalty MGMT, to rock legends Prince and The Cure – and the result is an eccentric, unexpected synth pop/rock/shoegaze-inspired strike of lightning, illuminating everything it touches like a neon sign in a dark shop window. Guitars shred effortlessly, flying across a bed of synthesisers and unstoppable drums, while vocalist Sam Thomas’s voice reaches impressive heights amongst the complex arrangement. There’s genuinely something here for all true music fans – just one listen proves that this band have an inherent understanding of compositional techniques and skilfully use this to bend genres to create something totally unique.

Produced alongside Jonathon Tooke of the pop-punk duo Cry Club, and mixed by Andy D. Park (Deftones, Death Cab For Cutie), like you know better explores a person’s self-talk, as Sam explains, “The lyrics are supposed to be a conversation with myself while having a moment of introspective realisation. When I’m writing lyrics, my goal is to try and distil an emotion into words without explicitly using emotional language. With ‘like you know better’, the landscape I’m trying to detail is that of self-doubt and the process of figuring out what you’re doing with yourself in a time where there is no clear direction.”

PRETTY BLEAK, formed during Sam, Sanji and Kyle’s high school years, plan to release more music this year beyond like you know better. With the addition of Cherie Bridgman, PRETTY BLEAK have reached their final form. There has never been uncertainty amongst PRETTY BLEAK about their dedication to the craft, as Sam says, “Speaking for myself, there hasn’t been a moment in my life that I can remember where doing music as a career wasn’t what I wanted. I think everyone else in the band has had a similar experience to varying degrees. We’ve all been playing in bands and making music since we were really young.”

LIKE YOU KNOW BETTER – PRETTY BLEAK – Official single artwork below 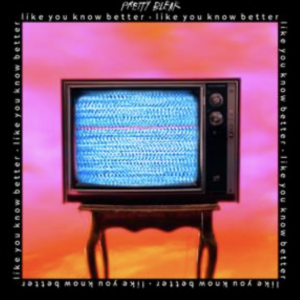