Adelaide indie outfit Pinkish Blu unveil their new track ‘Start A Band’. The song celebrates writing and performing music together, and is the follow up to their hugely successful single, ‘Backward’ which was added to Triple j last month.

“Start a Band’ is about knowing someone that’s stuck in a rut and our honest, heart-felt advice to them is to just “start a band”, because based off our experience, it’s one of the best things a person can do in their life. Being in a band has become less about writing and performing music together and more about sharing a special bond. From the countless laughing fits and leaning on each other to sleep, to knowing each others favourite foods, tv shows and music off by heart, we can depend on each other to be there through all the ups and downs and as a bonus we get to play music together. So I guess you could say this song is part directive and part celebration for anyone down in the dumps to consider starting a band.”
Pinkish Blu

Start A Band is accompanied by a behind the scenes peek at what it’s like being on the road with Pinkish Blu.

Having supported the likes of The Rubens, Trophy Eyes and more, as well as performing on lucrative stages including BIGSOUND and Groovin The Moo, Pinkish Blu are hitting the road with Odette, playing venues in Gold Coast, Brisbane, Byron Bay this May. 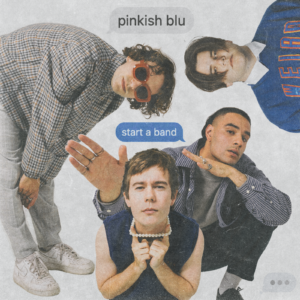