AND KEDUS FOR OFFICIAL

With it’s sticky lyrics and a resounding chorus, the original track shot to #1 on the Global Shazam chart and #1 on Apple Music across Africa. It quickly moved to the rest of the world, landing in the Global Top 20 on Apple Music, as well as debuting at #1 on the UK official Afrobeat chart and peaked at #8 on the Australian Spotify Viral 50 chart. “Finesse” has already gathered over 51 million global streams and has over 878 thousand sound uses on TikTok.

On the collaboration, Kedus notes “I had a lot of fun with this and I already knew the track and had been vibin to it. I laid a few melody ideas down until I found the right one then wrote to it and laid it down at 6 degrees studio with Soulis engineering”

Pania adding “I have loved this track since hearing it in clubs so I was gassed when I got asked to jump on the remix. It’s a worldwide anthem and to be able to put my own touch on it is a blessing for me.”

Pheelz writes with passion and sings from his soul. Over the past few years, the Lagos artist has made songs that blur the boundaries between Afrobeats, R&B, and mainstream pop—using intense emotion and vibrant melody as a force that bridges diverse sounds and styles. Songs like “Finesse,” featuring fellow Nigerian star BNXN, have started to resonate—bringing Pheelz’ boundary-pushing music and earnest, heart-warming emotion to the top of the charts in the UK and his home country. In a sense, it’s a moment that Pheelz has been working toward since he was a kid.

Pheelz, born Phillip Kayode Moses in 1994, grew up singing and playing keyboards in the church run by his father, who is a pastor in Lagos. He soon began producing and he landed his first hit at 16—“First of all” by Olamide, a woozy, electronic hip-hop jam. Since then, Pheelz has become one of Nigeria’s most in-demand producers, working on records for stars like M.I, Mr. Eazi, and more. In 2020, he won Producer of the Year at The Headies—Nigeria’s hip-hop awards—and in 2021, he released his breezy Hear Me Out EP, which earned millions of streams and brought his emotional pop to even more listeners around the world. Even so, the success of “Finesse” has changed everything for Pheelz, except his mission to put all of himself into his songs. He’s sure that this is just the beginning of a meteoric rise now that he’s inked a deal with Warner Records. “I’ve been plotting for years. I was ready,” he says. “I am ready.” 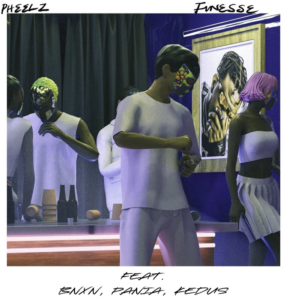 As a first-generation Ethiopian who was born and raised in Brisbane Australia, Kedus manages to reach a level of depth and introspection that extends beyond his 20 years. Although predominantly R&B centred, Kedus is inspired by all genres of music and doesn’t shy away from the challenge of originality.

Discovering his love for writing at the tender age of 11, Kedus immediately began working towards turning his dreams into reality, independently building his own home studio by 15. Since then, he has self-engineered 5 mixtapes and an EP which can all be found on his Soundcloud account.

After displaying his chapters of adolescence through his music, he is moving on to a new stage of life and creating new experiences that are sure to be reflected in his music to come. With each release, Kedus focuses on his trademark flowing vocals, acoustic melodies and atmospheric synths, but develops artistically through his exploration and delivery of his chosen themes and genres.

PANIA’s vision has always been global. Raised in the cultural melting pot of West Melbourne, PANIA took inspiration from her surroundings, fusing it with the fiery desire to achieve bigger and better things. While her music is intensely personal, she adds a three-dimensional nature to her song writing by viewing past situations through a different lens.

Having reinterpreted songs by Usher and Drake, it’s clear how these legends have influenced Pania: She takes leads from the romantic nostalgia of 2000s R&B, and the late-night, lonely soundscapes favoured by OVO producers; melding them into her own fresh, soul-stirring sound.  She released her debut single “Icyy” in 2020, a magnetic slow-burner. after, Pania led an adidas Originals campaign focusing on West Melbourne’s buzzing creative community, also following up her debut with sophomore single “Icyy Pt. 2” featuring Keziah.