Heavy music with meaning has been the mantra since day one for Perth metalcore outfit Patient Sixty-Seven and today they are leading the pack – showing the way forward with new single ‘Wayfarer’!

Despite hailing from one of the most isolated cities in the world, the bands heart and polished metalcore sound – combining crushing breakdowns, ambient guitars and the two-headed vocal tandem of Tom Kiely and Rory Venville – has proven it’s more than just about where you’re from.

P67 recently dropped single ‘Damage Plan’, with Games, Braaaains and A Head-Banging Lifesaying that it is “Fiery and ferocious, this Aussie metalcore unit have a lot of pent of feelings to express and they do so in style.”, and triple j Unearthed head honcho Dave Ruby Howeproclaimed that the single “…slaps harder than a Ric Flair right hand.”

Vocalist Tom Kiely said that “Wayfarer is an important song for our band. I drew inspiration for the lyrics and themes from the graphic novel Sandcastle. The uncertainty and fears around the pandemic, life passing us by before our eyes. That fear struck a chord with me during the recording process , and the song really hones in on that – talking about the anxiety in growing older without a sense of purpose or direction.”

“It’s a bit different for us as most of our lyrics to date have been a little more literal – this was an opportunity to talk on what that fear felt like for me, and ask some harder questions. I’m really proud of Wayfarer and how it came together. Sound-wise, I feel it brings some new things to the table for us in terms of being more guitar-driven – pairing the soaring guitar leads and riffs with the big sing-along chorus. The vocal performance is one of my favourite I’ve ever given, and I feel it showcases our progression as a band in still wanting to keep it heavy – but bringing in new elements to help it feel fresh.”

The new track was written by Tom Kiely and Rory Venville from P67 and additional composition was inserted by Bryce Kariger. Production was handled by Ryan Botha (Audax Studios) and Bryce Kariger and it was Mixed and Mastered by Ryan Botha. Artwork for the single was created by Christopher Erb.

Patient Sixty-Seven’s new single ‘Wayfarer’ is out now on all digital outlets and streaming platforms -and can be purchased/streamed at https://kntrlla.co/wayfarer. Official single artwork below 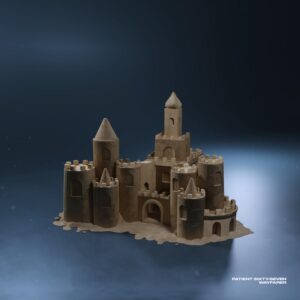