Since forming in 2019, Patient Lounge have catapulted into the Australian prog-rock scene on the back of their first two singles, in what was a monumental year for the band. Alongside two interstate tours, they placed #41 in 4ZZZ’s Hot 100, performed at Dead of Winter Festival, and supported internationally acclaimed acts Haken (UK), Pop Evil (USA) and Wolfmother.

While the band’s previous singles are a little heavier in style, fan-favourite new release, Places, has a lighter touch; a catchier composition that maintains Patient Lounge’s distinct progressive sound and individual creativity. Centred around intertwining guitar riffs and strong, hooky melodies, the song is a reminder that, especially in the arts, we are all capable of great things with a bit of perseverance and self-belief.

“Places is a really special song for us because it’s the first song Eric and Zach wrote together. The song ended up sounding really hopeful and happy, so while we do play around with a few funny time signatures and grooves, the guts of the song is pretty accessible,” said Patient Lounge of the new single.

Places is the group’s third track working with Bernie Wedrat at Lush Recording Studios and mastered by Ted Jensen.

With plenty more to come from the inimitable prog-rockers in 2020, Patient Lounge are set to continue “breaking new ground and dismantling stereotypes,” (GC Live, 2019).

Patient Lounge will be playing a launch show on September 26th as part of The Zoo’s ‘Anti-Social’ lineup, tickets available through Oztix. 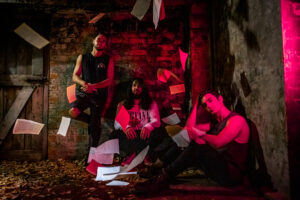 “If you like Australian prog rock I’d be getting onto the Patient Lounge train, cause these guys are going places.”

“Another rocket firing up the ascendancy of Aussie prog metal alongside names like Voyager and. Karnivool, if you haven’t zeroed in on Patient Lounge being the next big deal, now is your chance.” (Hysteria Mag, 2020)