NEW CUT ‘GIVE IT UP

Following on from their highly successful release ‘Easy Love’, Gerringong-based indie-rock quartet Pacific Avenue have just shared their vibrant new single ‘Give It Up For Yourself’ – produced by Chris Collins (Skegss, Yorke, Middle Kids).

True to the band’s fabulous sound, ‘Give It Up For Yourself’ combines exquisite guitars with effortless percussion, iced melodiously with silver-tongued vocals and liquescent harmonies. The evocative chorus is a fusion of optimism and reminiscence, tinged with Brit-pop familiarity and emphasised with flourishing instrumentation. The accompanying video, filmed by Tasman Wilson(Ruby Fields, Adam Newling) and featuring Matt Ford from The Inspired Unemployed, underwrites the track’s buoyancy with vivacious footage of routine and improvisational dancing in mixed locations.

The band talk about the story behind ‘Give It Up For Yourself’:

“’Give It Up For Yourself’ is a song that acknowledges and celebrates your life, everything that you are, and everything that you have overcome. When I was writing the lyrics, I wanted to keep in mind the importance of taking a step back and appreciating how far you have come, no matter how far along you are in achieving your dreams. This song is about giving yourself some credit because if the younger version of yourself could see you today, I’m sure you would be proud.”

To coincide with the release, the band will embark on an Australian headline tour, playing shows in Perth, Adelaide, Melbourne, Brisbane and Sydney, supported by last year’s Unearthed High Competition winners The Rions.

After recent touring turbulence, this will reignite the band’s relentless schedule, having previously sold out rooms such as Factory Theatre in Sydney, three Northcote Social Club shows in Melbourne, Jive Bar in Adelaide, and Wollongong Uni. The group have shared stages with RubyFields, Ocean Alley, The Wombats (UK), Skeggs, Lime Cordiale, Thelma Plum, Tash Sultana, British India, Missy Higgins, The Vanns and San Cisco, as well as past appearances on the main stages at Australian boutique festivals Lost Paradise, This That and Yours & Owls.

Previous single ‘Easy Love’ proved to be the group’s best performing single to date, being voted in at #108 in the 2021 triple j Hottest 200 countdown and led to the band being triple j Unearthed Feature Artist. The song saw widespread support from the likes of Spotify, Apple Music, FBiRadio, 2SER, SYN FM, NPO Radio 2 (NLD), 4ZZZ, Double J, Clash Magazine (UK), NME, Backseat Mafia, Milky, AAA Backstage and Something You Said. The song and video were together added to rotation on ABC’s triple j and rage. 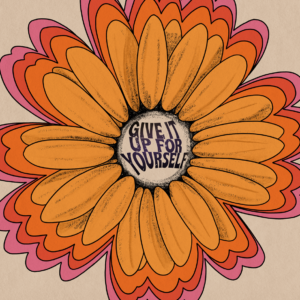 ‘Give It Up For Yourself’ is available worldwide now. Official single artwork above 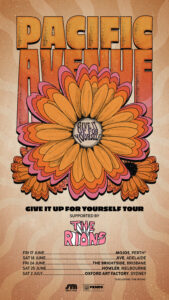 “Pacific Avenue could conquer the world with ‘Easy Love’. It’s pure joy and singing along to it feels so damn good. It’s easy love when it comes to this song!” – ★★★★★
Declan Byrne – triple j (AUS)

“’Easy Love’ is an anthem in waiting, with the four-piece letting their swagger come to the fore.”
Clash Magazine (UK)