Opening with poignant guitar chords, ‘Let Me Rust’ vigorously bursts with potent drums and driven distorted riffs, before the melancholic vocals of Sean Harmanis guide the track dynamically through quiet verses and compelling choruses. Emotionally charged hooks lead into an entrancing bridge, where colourful harmonies then pave the way for a monumental finale to bring the song to its abrupt ending.

Harmanis talks about the process behind ‘Let Me Rust’:

“This tune was probably the main catalyst for starting the band in general. To me, the song is about feeling as if you’re going to waste. At the time, I was struggling to find purpose and felt as if I very had little direction in my life. Between Make Them Suffer tours I felt an increasing sense of isolation and separation from my friends and normal life at home. This led to some unhealthy habits. The lyrics ‘Let me rust. Drink me empty. Turn to dust, slow and steady’ are about the vicious and unhealthy cycle I felt I had fallen into and the increasing sense of isolation that paired with my reclusivity.

Musically, I tried not to think about it too much. I just see each section as a bite-sized moment from my favourite bands of my early adolescence. They come together to form the alt-rock Frankenstein that the song is.”

In the coming weeks, Onslow will release an accompanying video clip for ‘Let Me Rust’.

‘Let Me Rust’ will be available worldwide on Friday, April 9 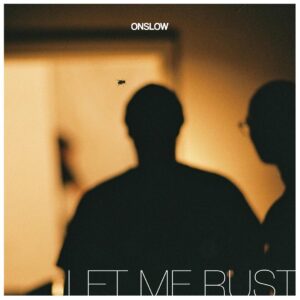