Finnish metalcore eccentrics ONE MORNING LEFT revived the legendary and iconic white diamond glove in their special take on Michael Jackson’s ‘Beat It‘ covered in their very own charm.

Founded in 2008 in Vaasa, Finland, ONE MORNING LEFT is well known for their unique blend of electro, hardcore and metalcore influences as well as their entertaining and energetic live shows where absolutely anything can happen. 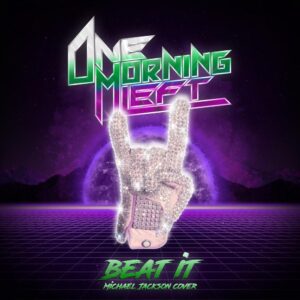 ONE MORNING LEFT has played shows with bands like AMARANTHE, MACHINAE SUPREMACY, ADEPT, PROTEST THE HERO, FEAR OF DOMINATION, TURMION KÄTILÖT and WE BUTTER THE BREAD WITH BUTTER. The band has also graced the Finnish festival season, playing renowned festivals like Tuska Open Air and Rockfest.