Oddball icons Ocean Grove have revealed an acoustic cut of ‘SHIMMER’ taken from their sophomore LP ‘Flip Phone Fantasy’ today. On the release, frontman Dale Tanner says that the stripped-back acoustic recording is a fresh opportunity for intimacy between band and fan, one that OG haven’t offered their junkies until now.

He adds: “Coming from the heavy music world (being very masculine in its nature), ‘SHIMMER’ marks a milestone in evolving manhood at which point one allows themselves to be fully seen; a sentiment perhaps not previously encouraged or canvassed in the scene Ocean Grove spawned from.”

Tanner also elaborates that the original version of ‘SHIMMER’ was already new territory for the band, even by their standards.

“Dipping into our flip-phone-era rock influences, the track is an unapologetic love song, which seizes the opportunity to showcase another colour from the 69 shades of OG. But more than that, the track is pure in its intention: to inspire and empower the listener to realise their unlimited potential, seen through a lover’s lens. Every being on this planet is a crazy-ass shooting star without even knowing it, and Shimmer is the validation of that very essence and power within us all.”

Ocean Grove’s technicolored sophomore record debuted at a whopping #8 on the ARIA Album Chart and has been praised worldwide for its lawless and free creativity. Singles ‘ASK FOR THE ANTHEM’, ‘JUNKIE$’ ‘SUNNY’ and ‘SENSE AGAIN’ enjoyed rotation across triple j, meanwhile the record was named Album Of The Week via The Music and Hysteria classed it as one for the history books alongside a huge 10/10 review.

Flirting between moments of blistering chaos to tenants of alt-rock, nu-metal and hazy moments of reprieve, Ocean Grove plough through a thoughtfully complex series of moods and bends throughout ‘Flip Phone Fantasy’, refusing to sit still long enough to be categorised into anything other than pure creativity and resistance to the mainstream.

“Thrilling, weirdo party jams that have never heard of convention. Ocean Grove still proudly give not one single fuck.”
Kerrang!

“Great heavy records are those that are different from the pack, and ‘Flip Phone Fantasy’ is a fiery beacon in this regard, one that excites as much as it surprises.”
Album Of The Week, The Music

“The band embody the importance of individuality… ‘Flip Phone Fantasy’ is a fitting tribute to that, and a breathtaking adventure to be with.”
10/10, Depth Magazine

‘FLIP PHONE FANTASY’ IS OUT NOW VIA UNFD 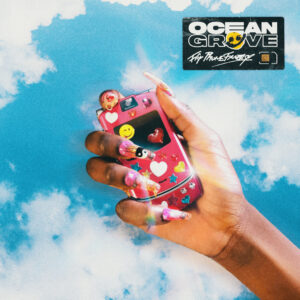