Tasmanian singer-songwriter Nuria has returned with her latest single “Red Velvet” a stunning contemporary indie track featuring breathtaking vocal layering and masterful instrumentation. “Red Velvet” focuses on the narrative of a showgirl. The glitz and glamour she displays contrasted by her dark unguarded personal life.

And mixed and mastered  by Peter Holz (Gang of Youths, The Veronicas, Jessica Mauboy, Delta Goodrem). Nuria, a new force in the game is continuously proving her power, belting out soul stirring tracks that leave listeners yearning for more.

“Red Velvet” is Nuria’s third single release of 2021 after “Juliette” and “Closer”. Both of which were played on beloved community radio stations Radio Adelaide and 4ZZZ.

“Juliette” was premiered on the femme empowering blog Women In Pop and was featured across Amplify, Backbeat Podcast. And Rawing In The Pit among others. “Closer” was featured on FBi and 2SER as well as receiving praise from Amplify, Like Velvet and AuspOp.

Nuria is the stage name of Tasmanian indie-pop artist Anna Maynard. Pronounced Noo-ree-ah, this name from her childhood meaning “Fire of the Lord”. Speaks of passion, boldness and captures a spirit unhindered by the constraints of growing up.

Nuria’s story is reflected in the depths of her songwriting. A childhood of fantasy, tumultuous adolescence of desires, insecurities and self-discovery. The “sensible” choice of a day job as a doctor and all the while a burning and insatiable desire to create and connect through music.

A seasoned performer, Nuria has previously worked under her name Anna Maynard having notable past performance opportunities.

Including the Cygnet Folk Festival, Nannup Folk Festival, Top Half Folk Festival and support act for the Waifs. With fellow artist Dave Crowe (aka Resin Moon). She is also a regular feature at MONA, the Wrest Point Casino Hobart and an active member of the Australian Songwriters Association.

With the release of her debut album “Alive” in 2020, Nuria’s music is being received by audiences throughout Australia. With massive community radio support and her songs being added to the ABC rotation, this Tasmanian artist is building momentum with each release.

Singles from her debut album have made it into the Top 30 for the 2020 Australian Songwriters Association Songwriting Contest as well as being selected in the Unsigned Only Competition semi-finals.

Taking the world by storm Nuria is preparing for the release of her second album in 2021. With her soulful and enigmatic vocals wrapped up in the multi-textured and elegant production work of Sam Phay and mix/master engineer Peter Holz, this emerging artist is stepping into an exciting new chapter.

“Red Velvet” is available on all platforms now. 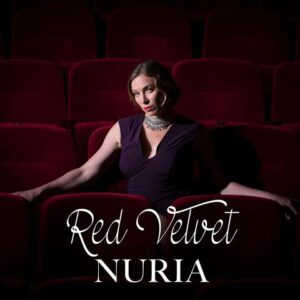