Fresh off the back of the release of their fired up single ‘Two Brains’, Dunedin-based rock group Hot Donnas release their new EP, The Adventures of E-WAN.

Across six tracks, the EP dives into a rich blend of indie, grunge and surf-rock sounds that provides a definitive picture of the band Hot Donnas have flourished into over their last year of performing, writing and recording.

Recorded at Radio 1 Studios in Dunedin, The Adventures of E-WAN has been in the can for some time now, however because of the curveballs the music industry was thrown this year its release had to be pushed back to November. For the band though, the record is long-lasting in its impact and quality; this is a statement of intent from Hot Donnas. An introduction to some, and an exciting update for fans who have been with them since their 2017 debut album, Greek Yoghurt.

Where October’s ‘Two Brains’ single gave listeners an insight into the energy of The Adventures of E-Wan, we see Hot Donnas’ dynamic presence and strong group identity come through right throughout the other five tracks. Layered guitars and percussion meet expert production (‘Miss Season’, ‘Tube Socks’), while grit and attitude are matched well by refined songwriting chops (‘Beach’, ‘Type A’).

“There isn’t one writer that takes over, we all make contributions to the song and have our own creative freedom to do what we want. The recording process was also very laid back for this collection of music. We have built a solid rapport with Steven Marr, our engineer; he made recording effortless and was open to accommodating the ideas we had in mind. I think our laid back personalities can sometimes be disadvantageous but in the studio it seems to work for us!” Mitch Sizemore, Hot Donnas

The EP is Hot Donnas at their most creative for sure, and also serves as an exciting update to where the band is at as a collective, primed to return to live stages. The progression heard on this EP is a natural one and sits well alongside the band’s previous releases. 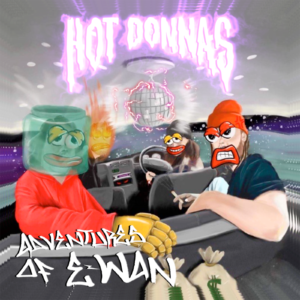 “Dunedin four-piece Hot Donnas is a group most certainly amongst the highlights, teetering between a full-blown New Zealand break-out and an act that’s sure to play a part in the country’s musical future.”

“A firecracker of a tune that mixes up the indie-rock sensibilities of the Arctic Monkeys with the high-intensity riffage of classic outfits like Queens Of The Stone Age.”

“The exciting Aus-punk meets alt-surf-rock sounds of Hot Donnas…will have you more than just tapping your foot.”

“Like all the best bands, they understand the importance of constantly rehearsing and gigging to improve their musicianship.”