“I Just Called” is laced with mischievous energy and sees NEIKED, Anne-Marie and Latto flip Stevie Wonder’s timeless classic “I Just Called to Say I Love You”. The track, produced by NEIKED, is joined by a lyric video that celebrates bravery, truth and expression – centred around a phone booth, it transitions through a series of frames that sees each character deliver their own truth to an acquaintance at the end of the line. 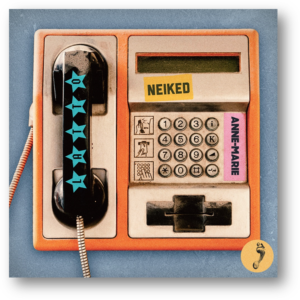 NEIKED is a duo hailing from Sweden, who are known for their global streaming hits “Sexual”, “What Lovers Do” and “Better Days”, with the latter scoring Top 20 on the US Billboard Hot 100 chart.

Since their inception in 2015, NEIKED began to independently release records under their own label NEIKED COLLECTIVE (now called ORPHAN) and since, have gone onto collaborate with a host of names including SZA, Polo G, Muni Long, EARTHGANG and Nile Rodgers.

Anne-Marie’s rise to stardom has been nothing short of meteoric. A former 3 x world karate champion and West End child star, Anne-Marie is a multi-platinum selling artist who has gone onto become one of the world’s most-loved and successful pop stars of our times.

Following a string of chart-busting singles over her career to date – from her Ed Sheeran co-write and 7x ARIA Platinum “2002” to the garage-infused juggernaut and KSI collaboration “Don’t Play” – Anne-Marie is an artist who wins on her playful commentary, magnetic vocals and infectious personality, all of which were perfectly showcased her 2016 debut and four million-selling, Speak Your Mind, becoming that years’ biggest-selling debut release in the UK.

Last year saw Anne-Marie make new strides, too. Making her prime time debut as a new judge on talent show The Voice (a show she won), Anne-Marie released her much-anticipated and critically acclaimed second studio album, Therapy. A title that holds an extremely important message to the Mind Charity ambassador, Anne-Marie has continually campaigned for the conversation surrounding mental health, be that in her YouTube documentary titled ‘How to be Anne-Marie’ or fronting ITV’s Britain Get Talking campaign. During the same year, she also released her debut book, You Deserve Better; part memoir, part practical self-help, Anne-Marie drew on her own experiences to help readers tackle life’s challenges, embrace opportunities and celebrate their successes.

Raised in Atlanta, Georgia, fast-rising rapper Latto first emerged in the world of entertainment at just 10-years-old, when she starred in season one of The Rap Game – a talent show she’d later go onto to win.

Before signing with RCA records in 2020, the 23-year-old released an EP, Big Latto, in 2019, housing her breakout track and RIAA platinum-certified “Bitch From Da Souf”; a song that saw her become the first-ever solo female artist, from Atlanta, to score a platinum record. She followed-up the project with her second EP, Hit The Latto, which featured a remix version of “Bitch From Da Souf”, with the official video racking up 90 million views to date.

Latto, who has amassed over one billion global streams, has teamed-up with a host of A list stars on the global stage such as Cardi B (landing a cameo in the iconic “WAP” video), Young Thug, Future, Lil Durk, Chloe & Halle, Doja Cat and more.