Perth’s Nautical Mile have announced the release of their Embers EP! Released globally via US label Manic Kat Records. To celebrate, they have also announced Australian Tour Dates in Brisbane, Adelaide, Melbourne and Perth, presented by the label and with their mates Carrington alongside them!

With the disruption brought about by the global COVID-19 pandemic the band spent most of 2020 writing the follow-up record to The Only Way Is Through, with the product of these writing sessions, Embers, out now via Manic Kat Records.

2019 took the band to new heights with the release of their debut album The Only Way Is Through, featuring singles Marionette, Shattered and Wake Up. The band toured extensively, including three trips around Australia and support slots with Hellions, Senses Fail and Hands Like Houses. Between tours, the band recorded and released a cover of Jesse McCartney’s Beautiful Soul. 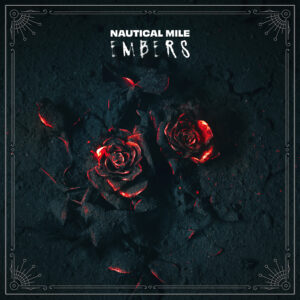 Embers was Written and Performed by Nautical Mile, Additional Programming and Production was handled by Jay Huxtable and it was Engineered, mixed and mastered by Jay Huxtable of Oracle Sound. The gorgeous Artwork and Design was created by Zak Wynter.

Consisting of Brodi Owen, Caleb Wynter, Dan Ray, Nick Henrisson and Jake Vimini, Nautical Mile surfaced from Perth, Western Australia in 2016, releasing their first self-titled EP. Following this, the second EP, ‘Playing For Keeps’, was brought to life in 2017 and reinforced the bands foot in the pop-punk scene. Preceding “Wake Up” from the album were singles “Regicide”, “Marionette” and “Shattered”. “Regicide” raked in over 120,000 streams on Spotify since. “Marionette” was premiered exclusively on Triple J’s Short. Fast. Loud. before official release, which saw it added to Spotify editorial playlists ‘Pop Punk’s Not Dead’ and ‘New Punk Tracks’ and snatched up AU Review’s ‘Track Of The Day’ shortly after. Nautical Mile have shared the stage with the likes of Trophy Eyes, Hellions, Hawthorne Heights and The Decline to name just a few.