I OH YOU are excited to share ‘Shade (kmoe remix)’, the energetic rework of electronic pop auteur MOSSY’s latest single.

Backed by tastemakers such as Lyrical Lemonade and Majestic Casual, and industry peers such as Laura Les of 100 gecs, brakence, Curtis Waters, Cashmere Cat and glaive, kmoe is a 17-year-old artist/producer/songwriter that creates a distinct blend of electronica and pop that mixes his eclectic taste and experimental approach. His enigmatic sound has seen adds to influential playlists including Spotify’s New Music Friday, hyperpop, idk and RADAR Canada amongst others, as well as Apple Music’s Glitch and support from Zane Lowe.

“kmoe is such a huge talent. I’m so grateful he decided to work on the Shade remix. It’s so unapologetically extra, and the chiptune and dubstep vibes are wild.”
– MOSSY

Bursting with energy, ‘Shade (kmoe remix)’ sees MOSSY cross into entirely new territories, suggesting that what you think you know of MOSSY, is just the tip of the iceberg. 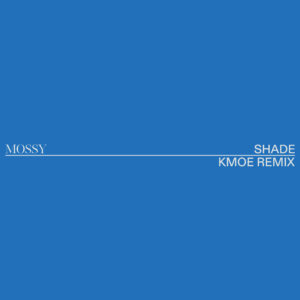