Los Angeles singer-songwriter MORGXN has revealed MERIDIAN: vol 1, the first of a two-part EP. An artist who makes truly vulnerable music, MORGXN brings that radiant authenticity to a mesmerising selection of songs and ultimately proves that sensitivity may be a deep source of strength.

We’ve already seen the release of “PORCELAIN” from the EP with defiant energy channelled in stomping beats and majestic chanting vocals. While on the emotional ballad, “HOW DO YOU HOLD WHAT HURTS,” MORGXN shares a stark but finely detailed meditation on the unbearable weight of deep-rooted pain. Fueled with punchy pop velocity, the album’s focus track “Losing Myself” was the first song written for the MERIDIAN: vol 1 project produced and co-written with NZ trio Thom Powers (of The Naked and Famous), Chelsea Jade and Simon Oscroft. The song is an admission that the constant touring and pressure MORGXN felt was beginning to erode their spirit.

“Sometimes on tour people look at me like I have answers when I am just a human being fumbling through the dark,” said MORGXN.

Coming from a particularly tumultuous time in March 2020, MERIDIAN: vol 1 is shaped by a 24 hour period where MORGXN experienced the highest of highs and the lowest of lows. Within one day the world went into lockdown, and MORGXN was dropped by their record label of five years, leaving them devastated. “Music is the only way I know how to reach people, and the label was the only way I’d know how to make that happen,” said MORGXN. “I was terrified.”

In a surreal turn of events, the same day saw Billie Eilish post a list of five songs that inspired her Grammy Award-winning smash hit “bad guy,” including MORGXN’s very own “home” – the lead single from vital which was a Top 10 Alternative radio hit. “The world was entering a complete unknown, and at the same time, I was having an extremely low and extremely high day all at once,” MORGXN recalls. “It was this crazy thunderstorm of panic and excitement, and at some point, I decided to just lean into the uncertainty, in the hope that I’d maybe discover something.”

One of the first outcomes of that discovery, MORGXN’s self-released single “WONDER” premiered in early summer and soon amassed over 50 million global streams, in addition to going viral on TikTok. Despite the track’s success, MORGXN felt shattered by all the upheaval they had recently endured—in both their personal and professional life—and found their heartbreak compounded by the isolation of quarantine. Nonetheless,  they moved forward with making music, almost entirely by instinct. “Working on this album is what kept me waking up every day,” MORGXN said. “The songs kept raising their hand and asking me to be present, so that’s exactly what I did.”

In a series of remote sessions, MORGXN soon began sculpting MERIDIAN: vol 1‘s kaleidoscopic sound by collaborating with a stellar lineup of songwriters/producers, including Mark Jackson and Ian Scott (Bishop Briggs, Skylar Grey), Dave Bassett (Elle King, Weezer), Jennifer Decilveo (MARINA, Miley Cyrus), Tobias Kuhn (Dreamers, Alice Merton), and Thom Powers of The Naked and Famous. As the album took shape, MORGXN landed on the title that had come to them in a dream, scrapping their original intention of naming the project “WONDER.”

Over the past three years, MORGXN has been writing music and collaborating with some of the industry’s finest, including releasing their debut album vital and a lush, acoustic EP vital: blue. They have also made festival debuts at Lollapalooza, Firefly, Laurel Live and Hangout Music Festival, as well as toured extensively alongside the likes of X Ambassadors, Phoebe Ryan, Skylar Grey, miike snow, Dreamers, Robert Delong and Arizona.

A re-recorded track of their song “home” featuring WALK THE MOON was released in 2018 and in 2019 reached the top 10 at Alternative radio and Adult Alternative, while accruing upwards of 25 million combined global streams. 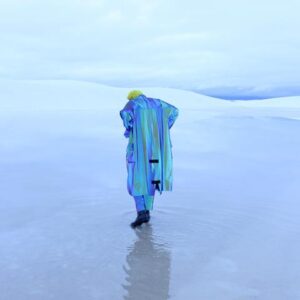 “MERIDIAN VOL 1” EP is available to stream on all platforms now.