Today, Sydney-based singer-songwriter Moody Beach (aka Melissah Mirage) shares her new single and video, “Why Not” out via Viscera Arts. Mirage will launch the single with two headline live shows in Sydney and Wollongong come late April.

A follow-up to her lauded sophomore EP, Mirage, Mirage continues to flourish in distilling her sound and lyrics as fluid expressions of her life experience, and exploration of agency and autonomy as a woman. Produced by Kim Moyes of The Presets, “Why Not” opens to a plucked bass line as Mirage’s hazy vocals cut to the fold, in a smoke-laced hit of instantly addictive melody. Between shoegaze-riddled fuzz and crisp snares, “Why Not” is the perfect amalgamation of analog and electro, as every note sits with clarity in Mirage’s serenading world of indie-pop catharsis.

Today’s accompanying video is a fitting aesthetic match. Close shots with a VHS feel capture Mirage staring straight down the lens, a gaze that peers straight into your soul. Watch and repeat for the desired effect, as Mirage takes the fuzzy feeling of “Why Not” to a visual realm.

Moody Beach on the single: “‘Why Not’ is about unfulfilled desire towards a person who is off-limits; how this desire muddles the brain and your capacity to think and act logically. To me, desire is one of the most primal human instincts. I reveled in the feeling and had a lot of fun writing the song. It was the perfect outlet and a cathartic release.”

Kim Moyes says about the release: “Even in the roughest & purest form of the demo, ‘Why Not’ stood out as something instantly exciting and relatable. The overall energy struck me as a perfect, but an unusual kind of left-field, hot-and-bothered. Most importantly, I felt that Mel’s lyrics nailed the sense of excitement, danger and angst of desire. It was an absolute pleasure to help realise Mel’s vision for the record.”

From what first started as a bedroom project, Moody Beach has impressively evolved into a live band project with an earnestly growing following. Originally from Adelaide, Mirage moved to Sydney finding new spaces to play, and musical peers she felt at home with where she confidently honed her vision and released two EPs, including her 2017 eponymously titled debut. Alongside her own headline shows, Moody Beach has supported New South Whales, and performed at the likes of Secret Garden Festival, Vivid Music and MCA Sounds on the Terrace.

“Why Not” today invites us to get reacquainted with Moody Beach, as Mirage’s passion and emotion for life’s complexities is articulated with transfixing verve. Reserve your ticket to see Moody Beach on the live stage. 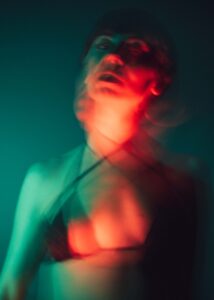