Mo•Louie is the moniker for Melbourne-based artist Monique (Mo) Sesto. Mo demonstrates her versatility as both a singer and producer with her latest single “Body” – an upbeat, bubbly, electronic track that has the funkiness of a Bruno Mars song, the electronic playground of Charli XCX track, infused with Mo‘s loud, playful and crazy personality. “Body” is a nod to body positivity and just like Mo’s ass, the beat is PHAT!

Her music creatively plays with cinematic elements and influences ranging from soul to avant-pop. The message behind “Body” goes far beyond its catchy hooks!

“‘Body is a celebration of body positivity, confidence and sex,” says Mo•Louie. “When I was younger I was really thin. My perception used to be that being thin was a really “beautiful” thing to be. A lot of my mental health problems and sickness meant that I had to take medication which made me gain weight. At the time, other people, even my family, would tell me you need to lose weight because you used to look so pretty when you were thin.”

Just like the instrumentation and production in the track, the song is powerful, sensual and fun. “Body” was written by Mo and longtime collaborator/friend Ven X.  produced and mixed by Mo•Louie (Mo Sesto) herself and mastered by Ben Feggans (Mallrat, Ngaiire, RÜFÜS DU SOL).

Mo released her debut single, “She Said” in November 2016. The electronic/synth-produced track made the Semi Finals of ‘The International Songwriting Competition 2016’ (ISC). Written and produced by Mo•Louie and mastered by Simon Lam (Kllo). Mo’s debut EP Fire Brick (2017) was celebrated by AAA Backstage . “a collection of genre-agnostic soul excellence.”

The EP was launched at Melbourne Music Week in a show co-produced with electronic artists Youthfire & Abraham Tilbury.

Mo and her long-time collaborator Ven X made the semi-finals of the International Unsigned Only 2020 Songwriting Competition, for their yet to be released song “Flames.”

2020 also saw Mo release her mixtape An Odd World, her first complete body of work mixed and produced by herself and mastered by Becki Whitton (Aphir). The mixtape included “Iso Iso Iso Bored” which was described by Forté Magazine as; “exciting, intoxicating and all out relatable”.

To end a solid year (despite COVID) Mo released her second single “Survivin” ft. Youthfire which premiered on JOY FM radio and was featured on Acid Stag’s Friday Favourites and described as; “very cool, unique and interesting.”

Mo•Louie is ready to kick off her biggest phase of creativity and music yet!

“Body” is available on all platforms now. 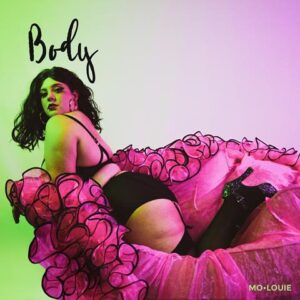