Frontier Touring are thrilled to announce Missy Higgins, one of Australia’s most successful and beloved singer-songwriters, will kick off the new year with a hometown performance at Melbourne’s Sidney Myer Music Bowl on Wednesday 27 January 2021.  Joining Missy Live At The Bowl are APRA Award winning Australian duo, Busby Marou.

Missy’s concert will be part of the Live at the Bowl concert series which sees Melbourne’s Sidney Myer Music Bowl host a three-month-long festival featuring an all-local program of music, comedy, family-friendly events and more.

“It’s beyond exciting to me that the live music scene is opening up again, I’ve really missed it. Starting 2021 off by playing at one of the most iconic Melbourne venues is going to be pretty special, I can’t wait. I think Busby Marou are a great fit for my crowd too, everyone’s in for a fun night.” – Missy Higgins

Classic songs like ‘Scar’, ‘The Special Two’, ‘Steer’, ‘Unashamed Desire’ and ‘Futon Couch’, plus her unforgettable live shows, have made Missy an authentic household name. Her iconic debut The Sound Of White (6 ARIA Awards, 9x Platinum sales) was the first of three albums to top the ARIA Album Charts, with On A Clear Night (2007) and The Ol’ Razzle Dazzle (2012) following suit.

The past few years have seen Missy touring stadiums across the country as Ed Sheeran’s special guest on his record-breaking world tour, writing and recording music for the acclaimed ABC TV series Total Control including the track ‘Secret’, and performing a powerfully emotive duet of ‘Carry You’ with Tim Minchin as part of the Music From The Home Front telecast on Anzac Day this year.

‘The halfway point of Missy’s set sent shivers down my spine and was a moment this Melbourne crowd should truly feel privileged to have witnessed.’ – The AU Review

‘The unmistakeable heart-aching personal touch that Higgins adds to every one of her songs is still ever so strong.’ – Music Feeds

Last month Missy released ‘When The Machine Starts’, a new self-produced song which focuses on some of the positives that might be drawn from this year’s lockdown experiences. To coincide with the single’s release, Missy filmed a very special performance of the track outside Melbourne’s iconic Flinders Street Station for ABC’s The Sound – watch it here.

Missy is one of the country’s greatest musicians, and the stories that she shares through songwriting come to life on stage. Act quickly to secure your tickets to witness the magic of these great Australian performers for yourself at Melbourne’s Sidney Myer Music Bowl in January. 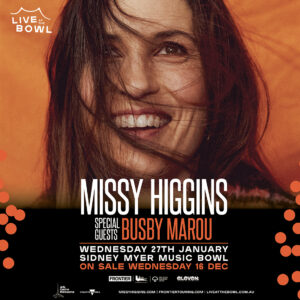 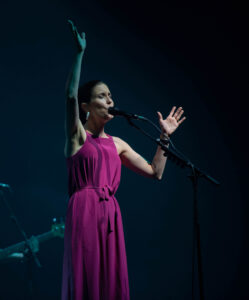