Mirrors are making up for lost time on the live music front and are appearing at Knight and Day Festival at Kyral Castle over New Year’s, they are heading out in January 2022 alongside mates Earth Caller and will be supporting Polaris, Make Them Suffer and Justice for the Damned on their Summer tour in February/March 2022 – ticket details for all shows and festivals can be found at mirrorsband.com.

Ceaseless work by the band alongside the production team of Scott Simpson and Lance Prenc(Polaris, Alpha Wolf) began in 2019 and throughout 2020, culminating with a ten track, genre busting tour de force, leaving behind their metalcore roots. The amazing new filmclip for single Purple Static was created by Third Eye Visuals. 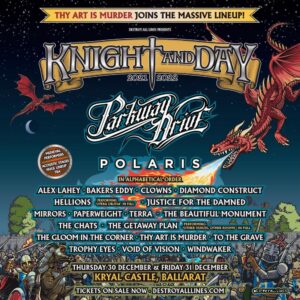 Wall of Sound said that Mirrors are “Crossing leaps and bounds while stepping away from their original djent sound” with the new album, Blunt Mag stating that new music from the band has “…as much swagger as it has snarl, with a mystifying twist of emo-esque flair” and triple j unearthed head honcho Dave Ruby Howe saying of the new single Purple Static “…this band just keeps on leveling up. A dark aura hangs over this epic sound from Mirrors with shades of Deftones and Northlane in the mix.“

Formed in late 2016 by vocalist Patty Goodman and guitarist Tyson Taifer before welcoming JackMackin on bass and later Rob Brens on drums, metalcore outfit Mirrors quickly turned the eyes and ears of Australian listeners towards Regional Victoria with the release of their debut EP ‘Fool’s Paradise‘ in 2017 and their 2019 follow-up ‘Cold Sanctuary’. These releases took the band beyond the borders of Victoria and around the country, showcasing their craft to audiences on tour with the likes of Wage War, Alpha Wolf, Thornhill, Crystal Lake and many more. 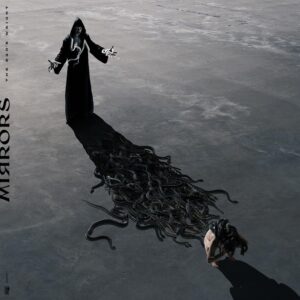