merci, mercy will bring her disarming pop anthems to Melbourne and Brisbane for the first time ever on her upcoming East Coast Tour. She will also return to her hometown of Sydney.

The announcement of the headline shows follows on from her recent performances with Next Exit Festival, where the songstress wooed fans across regional NSW, sharing stages with Ocean Alley, Dear Seattle and Clews.

Prior to hitting the road with Next Exit, merci, mercy played a four-week-long residency at The Lansdowne in Sydney. Audiences in her hometown are now well-accustomed to her charming and energetic live sets, following sold-out shows at the tail-end of last year and support slots for Matt Corby and Bernard Fanning.  The upcoming East Coast Tour marks her very first shows outside of NSW.

merci, mercy released her debut EP no thank you, no thanks in October, 2020. The EP’s six tracks included breakout single ‘Fucked Myself Up’ and follow up ‘Fall Apart’ and provided a snapshot of mercy’s life at the age of 18. The songs wove their way into the hearts and minds of fans across the globe, receiving airplay not just on local radio, but also on stations in Austria,  France, Germany, Switzerland and more. Her refreshingly honest and vibrant songs saw global support from over 30 Spotify New Music Friday playlists including the US, UK, India and Japan, and key Apple Music playlists such as Today’s Hits.

merci, mercy was also recently nominated for an AIR Award for Independent Single of the Year for ‘Fucked Myself Up’, alongside acts like Gordi and Spacey Jane. 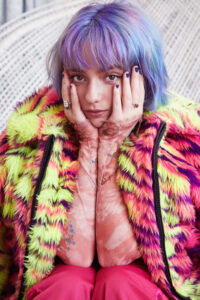