Coupling effortless cool with refined rock songwriting chops, Melbourne trio The Grogans unveil their second studio record, Day / To / Day. An album that has been designed to be absorbed, Day / To / Day is a sonic journey that has The Grogans delivering melodies, rhythms and great energy throughout.

Last month saw the band release single ‘Got A Girl’, a track that offered an insight into the charged up end of the album’s spectrum. Yet as the listener makes their way through its 12 track run time, The Grogans flourish as 60’s and 70’s surf rock sounds come together with contemporary slacker influences; all up making for a perfect Spring/Summer soundtrack. Even the album image, taken by seminal 60’s surf photographer John Witzig, perfectly encapsulates the cheeky escapism found in  Day / To / Day.

Previous singles ‘Got A Girl’ and ‘Dead Weight’ are two examples of The Grogans’ dynamism as a unit, with further highlights of their harmonies and melody construction shining across ‘Unnecessary’, ‘Graveyard Sleepin’ and ‘Strange Feeling’.

The laidback jam session vibe is captured and refined into a more realised and cohesive LP format by vocalist and guitarist Quin Grunden, who recorded and mixed the album, and engineer Steve Corrao. The pacing of Day / To / Day makes this great for road trips or long days hanging out in summer heat; ‘Gravel Road Blues’ and ‘Takin’ It Easy’ demonstrate slight psych influences in the band’s guitar and rhythm progressions.

“We wanted to build off of our last album and EPs, writing songs that we enjoy playing and listening to. It’s got a bit more of a 60s surf sound than our last releases; we just like that era – the style, the sound of the time, the cars. We also tried to have less limits, to show our wide variety and bigger picture of what The Grogans are, who we collectively are as people.” The Grogans

Recorded at Grogans HQ and out in Ocean Grove, Day / To / Day had the opportunity to come together outside of Melbourne, with Ocean Grove providing an idyllic relaxed setting for The Grogans to settle into. Spending their time making music, skating and hanging out made the album process far easier an experience to get through; with new ideas and sonic sessions coming naturally for the band over time.

“[The recording process] same as what we usually do; a couple of months writing, then we take a week off and lock ourselves away to get the majority of the recording done, then polish it up with added tracks at Grogs HQ. This time was in Ocean Grove, which was really relaxing. We’d surf, skate and just hang out without too much structure to the recording.” The Grogans

Forming in high school, The Grogans have got a stack of releases as well as a strong live reputation to their name in debut album Just What You Want (2019) and EP releases Grogan Grove (2018), Twangs ‘n’ Cans (2017), and Cacteyed (2016). Emerging as a dominant constant on the Melbourne music scene and an exciting presence on stages around the country. 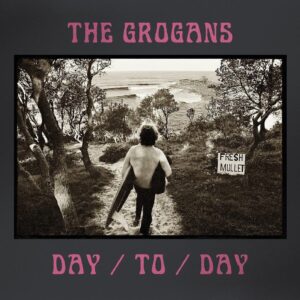 PRAISE FOR THE GROGANS

“The Grogans are ramping things back up on this one! What an infectious, jump around, 2 min surf banger..”

“The Grogans capture the laid-back lifestyle we all yearn for.”

“The Grogans continue to kill it. This is a massive chiller. The amount of people at both your shows this weekend was insane. A line around the corner and everything?!?!! Any time now… I can’t wait to see you guys explode! “

“Clocking in a smidge over two minutes, ‘Got A Girl’ is everything that we’ve come to love about The Grogans – fast surf rock guitars and lyrics about living life to the fullest.”