CYCLE is an electro-pop ballad that details the storyline of losing someone to suicide, and falling down the rabbit hole into a pit of mental illness and drug addiction. A song the first of it’s kind, CYCLE raises awareness for survivors guilt. The song paints a picture of laying on your bedroom floor doing drugs and passing time any way you can, it also talks about the confusion after a death where you still expect that person to show up or go to work even though you know they’re gone. CYCLE tells a love story between best friends that lasts beyond death and tells both sides of the story, with a brilliant additional female vocalist. Centred around bass and lush synths, this song is distorted, messy and dreamy –all the feeling I felt while writing

Originally from Canberra, Australia, after losing her father to suicide losing her best friend the same way, and finally coming out as a trans-woman, ODYSSEY fell out of a career in ballet and jumped headfirst into the arms of songwriting. Since studying music performance and then music production, ODYSSSEY has honed in her skillset and is set to take the world by storm in the years to come, starting with this song.

The first half of 2022 is set to be a big one for ODYSSEY S, offering a snippet into her deep, emotion invoking songwriting ways. 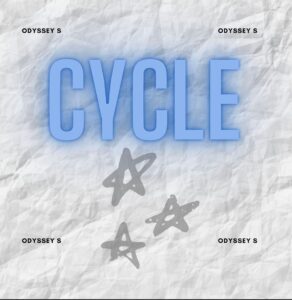