Across an audio-visual universe of multiple sounds and personas, the creativity of San Diego-based artist Garrett Seamans runs freely, hardly reined in by notions of genre or medium. Unfettered, escapist experimentation is the rule; vulnerability is the constant. From the alt-pop blankets of Postcard Boy to the comparatively guitar-forward carwash and the whimsical videos he releases under his YouTube channel, phylm, this ethos is what tethers all of Garrett’s myriad projects together.

Of the track, carwash says, “‘boyfriend, girlfriend’ is the story of falling for your best friend. For me, it was in the summer when I was seventeen. I didn’t want to ruin our friendship, so it took me weeks to finally make a move… The chorus chronicles that first kiss moment. Thankfully, it went well, and we are still together a couple years later now. I wrote this song reflecting on the beginnings of our relationship. A lot of our initial bond was over music and going to shows, so I’m happy this song carries the energy that live music supplies.”

Away from the moniker of Postcard Boy, the music Seamans creates as carwash is influenced in part but not limited to: emo and indie rock of the ’90s and early aughts, sunrises spent on the San Diego coast, his cinematographic work, high school romance, a need for a language more accessible than words themselves. With half-murmured vocals that feel as though they’re longing desperately to break out of their own demure hesitance, a deluge of crunched-out guitars awash in reverb and wistful, nostalgic melodies, ‘boyfriend, girlfriend’ channels the pangs and pulls of adolescent desire, combining the coastal haziness of Best Coast with the yearning of second-wave emo and the arena-sized relatability of modern-day bedroom pop in one effortlessly sweeping, lovelorn push.

‘boyfriend, girlfriend’ by carwash is out now, buy/stream it on Spotify, Apple Music, and more. 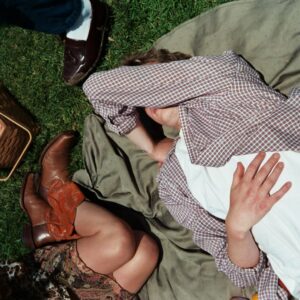