Earlier this year, Marrickville trio Mazy returned with the promise of an abundance of music to solidify their presence in Sydney’s music scene. Recently releasing the mesmerising single and W.A.M Bleakley directed video for ‘You Got Me’, today the trio stay true to their word, announcing the next installment of the Mazy saga with the release of their new single ‘Flowers’ on Sweat It Out.

The trio once again embrace the neo-psychedelic, brit-rock soundscape they’ve become known for, whilst introducing brass elements to create a sundrenched soul warmer. Showing off their musical prowess with a magical breakdown filled with divine guitar riffs and synth arpeggios, the track then speeds up to finish in a flurry of colourful harmonies and energetic instrumentation.

Tackling the songwriting process from a whole new angle, and paying homage to some of their favourite musicians, the trio share, “This track was definitely a fun one to work on. We wanted to dive into a 60’s sound palette that we all love and see where it took us. A lot of the time we’ll write songs completely on an acoustic before thinking about production so tackling this one using the experience as the inspiration was a nice change.  Brian Wilson is a massive influence for us and we definitely took a nod to him with the harmonies in the chorus. We wanted the sonic vibe to really paint the lyric and create a colourful, mercurial world that was unpredictable and.. yeah, psychedelic. We love playing this track live and the faster tempo and high energy is a welcome change from some of our slower songs.”

Recruiting Kim Moyes (from The Presets) for mixing duties, Mazy blends hypnotic vocal melodies with anthemic guitars and soaring synth hooks which echo the likes of Jagwar Ma, POND, The Beach Boys and The Stone Roses. Exploding back onto the scene with the release of ‘You Got Me’. The trio have been quick to earn wide acclaim from the likes of triple j, triple j Unearthed, Acid Stag, Life Without Andy, The Music, and Something You Said, with a very special performance recorded live in Sydney for Mood On The Roof. 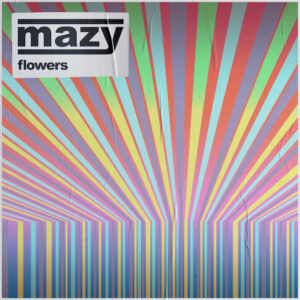 Mazy’s new single ‘Flowers’ is out now on Sweat It Out.