Written from the perspective of the heartbreaker, Max Lawrence brings you their new single ‘Confection’. The genre-bending artist creates a world oscillating between catharsis and chaos. Accompanying the hyper self-indulgent track is the camp, self-directed clip filmed by Fagan Wilcox (Peachnoise) and co-directed by Josh Coles-Braun.

While the sickly sweet track depicts themes of desire and temptation, there are also underlying themes of consumerism:

“The candy is tempting you to buy it and is essentially just a bunch of chemicals manufactured in a certain way to get the consumer addicted for profit. It’s all ‘Buy Me’, ‘Eat Me’, ‘Love Me’, which we see a lot in the modern age with the commodification of the self through social media, reflecting this neo-capitalist fever dream we’re currently in.”

This spurred an exciting collaborative relationship over email between the two artists who hadn’t met, resulting in a new, expansive sound. Enter the gooey realm of ‘Confection’ and be transported from reality!

So what is next for Max Lawrence…..

I’m working on lots of new music and am constantly experimenting and playing around with sounds and songs, and I have a good feeling that an album may be coming together so stay tuned! 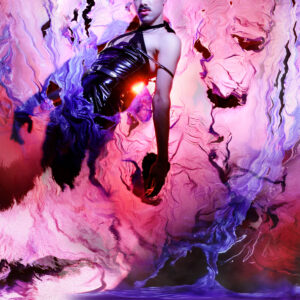 Enter the gooey realm of ‘Confection’ and be transported from reality!